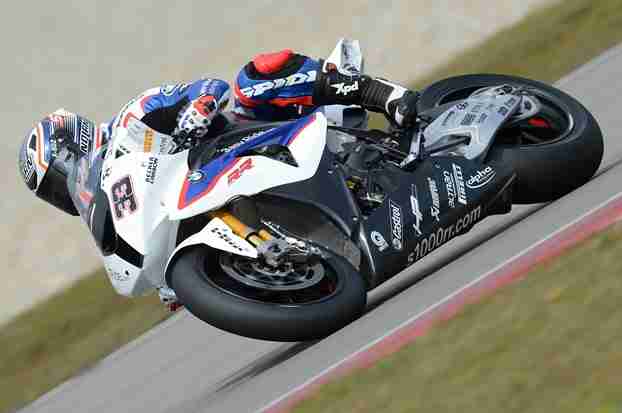 Team BMW Motorrad Motorsport is preparing for its second Italian outing in the 2012 FIM Superbike World Championship. The fourth race weekend of the season is scheduled for this weekend (4th to 6th May) at the “Autodromo Nazionale di Monza” (ITA). After three strong opening rounds, the team is looking to challenge at the very front of the field again with its two factory riders, the Italian local hero Marco Melandri and Britain’s Leon Haslam.

Marco finished runner-up on his BMW S 1000 RR at the season-opener in Australia. At the first Italian job, in Imola at the beginning of April, Leon finished third in both races to claim two podium finishes. When the series arrived in Assen (NED), both Marco and Leon came within touching distance of the first victory for BMW Motorrad in the Superbike World Championship. However, they just lacked that vital little bit of good fortune in perilous conditions. The team and both factory riders have good memories of the Royal Park in Monza: in 2010 the circuit was the scene of the team’s first podium in the World Championship. Last year, Marco finished runner-up in Monza, while Leon finished third on his RR to claim his place on the podium.

Three race weekends into the 2012 season, Marco currently lies fifth in the Riders’ Championship with 66 points, level on points with fourth-placed Sylvain Guintoli (FRA). Leon is not far behind in seventh place with 58 points. Together, the pair has already scored 124 points for Team BMW Motorrad Motorsport this year. In the Manufacturers’ Championship, BMW is third with 86 points. Only the best result from each race counts towards this championship.

“I think that Monza can be a good track for us. It is a very nice circuit and has a completely different characteristic to normal motorcycle tracks. It is very, very fast, very high-speed and requires very hard braking. I like all the corners, but the ‘Ascari’ corner is something special. It is the only combination of three corners in a row, so it is good fun. And the last corner is very important to get a good result. I hope that the weather will better than at Assen.

We just have to keep working hard and try to be consistent during the race. The championship is very open and it is easy to make mistakes, especially under tricky conditions. So we need to be very focused and try to give our best in every race.”

“We are making big, big steps. In Imola we had a double podium and, had things gone a little bit differently, we could have challenged Carlos Checa for the win. In Assen we definitely had the chance to win in both races — if we had chosen the right tyre and I had not crashed. These are a lot of ‘ifs’, but at least we now can say ‘if’ when we are talking about victories.

Monza is a track I like. I got made it onto the podium there last year. It would have been a double podium if I had not been taken out in the first corner in race two, when another rider crashed and my bike was hit, causing me to fall too. On this circuit you have a lot of heavy braking and you need to get the bike balanced as you brake. You mostly have chicanes leading onto the long straights, so you need your bike to accelerate well out of these chicanes. Obviously Aprilia is going to be the bike to beat there, but our RR is fast and strong. I am hoping for a good race and to challenge for the win again.”

“We showed in Assen that we are competitive in all conditions, but returned home with fewer points than we could have. To get these points is the target for the next race in Monza. It is a very special race track with long straights, where we will be able to make best use of the powerful engine on our BMW S 1000 RR. However, we must also be ready for the slow chicanes with their changes of directions and the famous ‘Lesmo’ and ‘Parabolica’ corners.

Both of our riders have good memories from last year’s races in Monza, as both were on the podium. Even last year, Leon was one in contention for the win. And our bike has been continuously further developed since then. As such, we are confident that our talented riders will compete for the top positions again. In preparation for the races we will work on the set-up, trying to get the maximum from all the new parts we have introduced during the most recent tests.”

Monza from Pirelli’s point of view

Monza is Pirelli’s home race, since the company’s headquarters are just a few kilometres from the “Autodromo Nazionale of Monza”. This track is historically probative for tyres: the extreme length of the straight stretches, the sustained high speeds and the violent braking zones stress the central part of the tyre section in a way that no other track in the Superbike World Championship does. Basically, the thermal energy developed at null lean angle both in acceleration and in braking is about 5 times more than that developed at Assen. And then there is the thermal stress on the right shoulder where, especially in the “Biassono” curve, the tyre stays leaned over for a long time at high speeds during acceleration, reaching thermal energy values on the shoulder that approach the record values of Phillip Island.

For this reason, Pirelli has decided to bring four solutions for the rear for the riders to choose from: an SC0 and an SC1 with an oversized 200 profile like the ones already seen during the Australian round. The third solution is also SC1 and last, but not least, the fourth solution is an SC2, both of which are in the standard size. The SC0 and the two SC1 solutions have a reinforced central section, which uses an SC2 compound, precisely for the reasons described above.