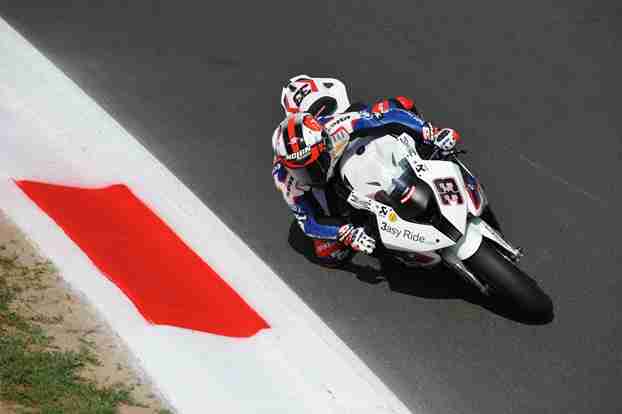 It was a perfect Friday for BMW Motorrad at Monza (ITA). In the first qualifying practice for the fourth round of the 2012 FIM Superbike World Championship, four BMW S 1000 RRs were placed in the top 5, with three of them in the first three positions on the provisional starting grid. The Bavarian bike had already shown its potential in the free practice, with BMW Motorrad Motorsport factory rider Leon Haslam (GBR), Michel Fabrizio (ITA) of the BMW Motorrad Italia GoldBet SBK Team and factory rider Marco Melandri (ITA) finishing as the top 3 and Michel’s team mate Ayrton Badovini (ITA) in fifth position.

Both factory riders from Team BMW Motorrad Motorsport consistently rode quick lap times, with Marco being quickest and Leon being second for most of the first qualifying practice. Only in the very last minutes did Michel do one faster lap to secure provisional pole position. Only 0.053 seconds behind, Marco qualified provisional second on the grid on his RR with Leon third. Ayrton completed the strong result with fifth position in the first qualifying practice.

“It was a good day for us. For Monza, we expected to be closer to the top than before, but today it actually went even better than we thought. I am not one hundred percent happy, because over the race distance I still have some issues with chattering. Today we tried put in as many consecutive laps as possible to understand the cause of the issue and how we can solve it. We also collected some good information for the race. Now I just hope that we have a dry race, and I also hope for good weather in the Superpole because this is a very difficult track in the wet.”

“I am pretty happy with the day. Today, we got through a few things that we wanted to do. This afternoon, we concentrated on race distance, doing longer runs. We started on a ten lap tyre and did another seven or eight laps on it. Even though we did that the times came easily and were close. It is a nice position to be in. We can now work on the little things and do not need to try to solve big things this weekend. Now we have to wait and see what the weather will be like tomorrow. If it is raining, it will be good to get a setting for the wet and then come Sunday, we will have worked in both conditions and be ready for everything.”

“It was a good day for BMW Motorrad, because having four RRs in the top five is amazing. I must say a big Thank You to all the guys in Munich and Stephanskirchen for the hard work they have done. This is the result. It means that the bike is competitive. We have seen already in Assen, and confirmed here, that we have made a step forward. I am really happy about the job done by both riders and their crews today. We knew that these two sessions might be the only ones in dry conditions, so we have been working quite hard in order to evaluate different set-ups and different tyres. We are ready for a dry race. Now we need to keep working hard and be also be prepared for the case that it is wet tomorrow, as the weather forecast is not so good. We also want to congratulate Michel Fabrizio and his team for securing the provisional pole position.”