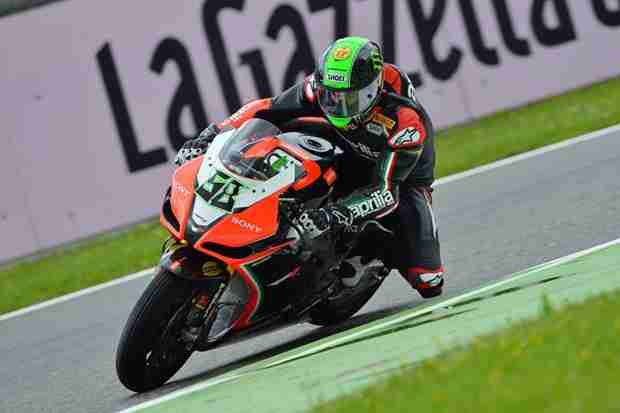 As predicted, the poor weather had a negative impact on the Superbike Sunday at the Monza circuit. After a warm up that confirmed impossible racing conditions in heavy rain, the riders prepared for the first start, casting glances toward the sky. In fact, after a few laps a sudden storm led to the suspension and subsequent cancellation of Race 1.

Everything was postponed until the second race, abbreviated to 16 laps and with a late start after the warm up lap in order to allow the wet spots on the track to dry off. Max Biaggi got off to a good start from the second row which took him into the lead pack straight away. The ranking leader engaged in battle at the last braking zone, increasing pace as the track conditions improved. But once again, the rain ruined Max’s and Team Aprilia’s plans, forcing the rider to cut short the hostilities after eight laps. Placings were decreed based on the laps ridden, with half points awarded. Max is still the leader in the rider standings, earning a point over Carlos Checa.

This is an outcome which naturally disappointed Max: “It’s hard to even know what to say after a Sunday like this one. Without the rain everyone would have had a lot more fun – the riders first and foremost, as well as the fans. Among other things, while coming back in after Race 1 had been suspended I also had a mechanical problem which would very likely have conditioned any restart. Race 2, on the other hand, was looking good for us. As the track improved I was able to push and I would definitely have made a play for the lead pack. It’s true that we’re ahead in points, but not with the margin that we could have been on a track that is so favourable to four cylinders”.

Eugene Laverty experienced the same disappointment, but he sees the glass as half full after taking his second consecutive podium with and for Aprilia. The rider from Northern Ireland was confident in his chances at battling for a top placement, which would have earned him valuable points. The halved scores deprives Eugene of an excellent chance to improve his position in the rankings. In any case, the third place at Monza, after the same result in the last race at Assen, confirms Eugene’s positive trend.

“We were really fast here in Monza in the dry and I expected to do well today. Unfortunately, after Race 1 was rightly cancelled, we started out for Race 2 without the certainty of being able to finish, and that’s exactly what happened. After a good start and overtaking a few positions, I was happy to have Leon Haslam in front of me, an expert rider who interprets difficult conditions well. I’m pleased with the third place – my second podium in a row – and now we’ll head for Donington where I hope to continue my positive trend”.