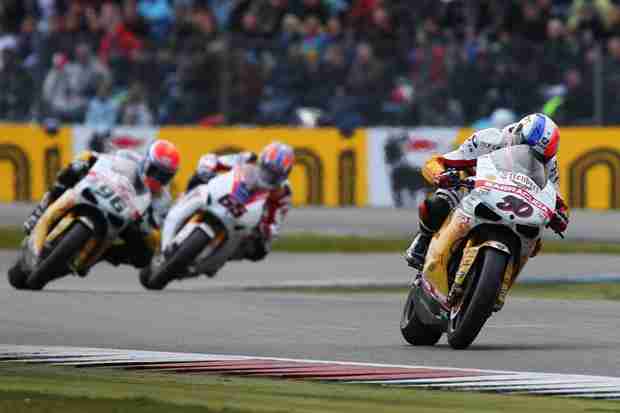 Just hours before the start of this weekend’s World Superbike round at Donington Park, Liberty Racing has issued yet another statement trying to clarify the controversial one that they released immediately after the Monza fiasco. Apparently everyone misunderstood the first one and they were not hitting out at Infront or Pirelli for the fiasco, but were criticizing that small group of riders and teams that seemed to have made the decisions on whether to race or not.

However it seems that the media wasn’t the only one to misinterpret their words as Infront has their lawyers looking into it and the Race Direction has taken Marco Melandri off of the list of riders who they consult with in case another difficult situation should happen in the future. In another statement, the team confirmed that they will present at this weekend’s event, but there are rumours that sponsor Effenbert has not brought their hospitality to England and the team livery could be without the Effenbert banner as a protest for the lost media visibility they sustained at Monza, as Liberty Racing continues to hint that they could lose their title sponsor all together.

The Liberty Racing Team, following an interview released by La Gazzetta dello Sport with team owner Mario Bertuccio, would like to further point out that the press release issued by the team on Sunday, May 6, has been unambiguously understood by some media and given the wrong interpretations to the concepts expressed.

The clear disappointment was directed to a small number of team managers and riders that conditioned the development of the Monza race for their specific sports interests, and not against Infront Motorsport, to which the Czech team has great respect and trust, and thanks to which the team’s image has grown over the years.

When the Sunday race one was cancelled at Monza, the team was damaged: “Our sponsor has invested heavily in the Effenbert Superbike project” said Bertuccio. “On Sunday we had Guintoli on and with such a result we couldn’t properly take advantage of the media visibility. And now we risk losing the title sponsor. ”

At Monza the team was ready to run, also thanks to the guarantee given by Pirelli about the perfect integrity of the tyre’s performance, something that was supported by our riders who would have no hesitation in competing.

“Liberty Racing will continue on its path of professional and sports growth in the World Superbike Championship. World Superbike is a passion and is the expression on two wheels which are closer to the real fans. Team Liberty attempts to give aim to this thrill every time it takes the track with its riders.

Dedication, enthusiasm and the will to compete with opponents shoulder to shoulder, without distinction between “official and unofficial”, is the indissoluble element that urges the Czech team to compete more strongly motivated, without underestimating to the sense of respect for significant economic investments without which it would be impossible even compete.”