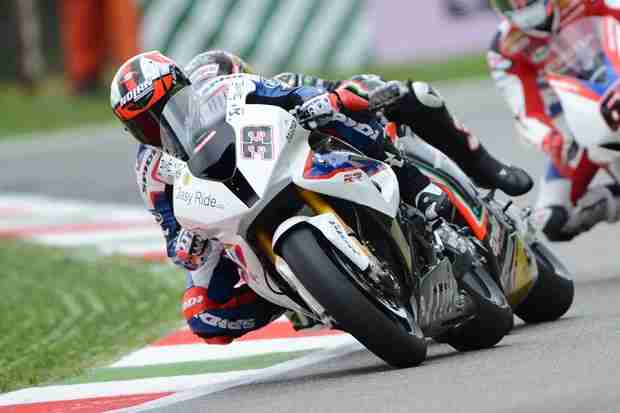 It took BMW three years and couple of crew changes and a former MotoGP rider by the name of Marco Melandri to get themselves their first ever win in World Superbikes Championship. As expected it was a tight race 1 at Donington Park with the four front row starters, Tom Sykes, Marco Melandri, Leon Haslam and Max Biaggi battling it over the race distance and never losing touch only to have Jonathan Rea enter the fray in the final exciting paint swapping laps.

Sykes was on pole, but Haslam went on out side to overtake the Kawasaki rider at the first corner, but the Huddersfield man wrestled back the lead, after an error by Haslam with the BMW duo still hot on his tail with Biaggi taking the rear of the fleeing group and Rea more than a second behind after battling it out with Carlos Checa.

The race would turn into a double battle a Sykes vs Haslam and Melandri vs Biaggi with the riders exchanging passes until first Haslam and then Biaggi – almost simultaneously – running off track giving Melandri the lead and 1.8 second breathing space until the finish line. BMW team mate Haslam came in second after he struggled to get past Sykes after his error at Foggy’s, but he managed to regain the spot at the Hairpin and hold on to it, while Sykes finished in third after leading a big part of the race.

A hard charging Rea was fourth after he got the better of Biaggi on the final lap, when the Aprilia rider went wide and snuck out from behind him. Reigning champion Carlos Checa after a very prudent start pushed up to sixth after having had to battle not only with Rea but also with Sylvain Guintoli who then faded to 8th. Checa’s Althea team-mate Davide Guigliano came home in 7th, with Fixi Suzuki’s Leon Camier in ninth and clearly suffering Michel Fabrizio rounded out the top ten with his GoldBet BMW.

Marking BMW’s first victory in 35 attempts, the manufacturer is also celebrating a 1-2 after Haslam fought back from his earlier mistake – when he ran across the gravel at Esses whilst battling with his team-mate – to snatch second from Sykes on the penultimate lap.

Sykes led for most of the opening laps, butwas forced into a defensive state during the latter stages. Nonetheless, he held onto third, holding off a charging Jonathan Rea, who made up three seconds in the closing stages to almost snatch an unlikely podium. Max Biaggi had to make do with fifth but holds on as the championship leader.