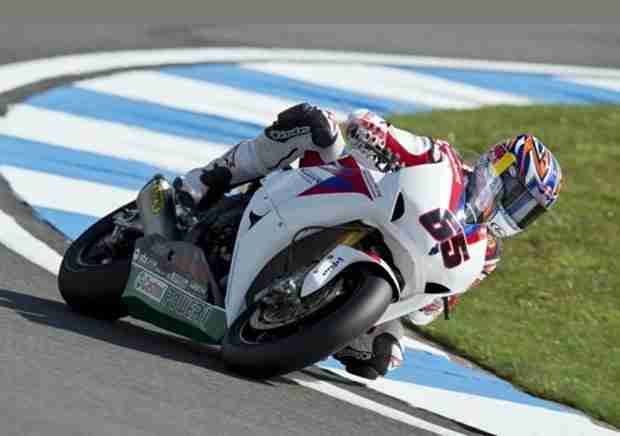 Race 2 at Donington Park has left BMW seething and calling for Jonathan Rea to be disqualified after he took his second victory of the season with a final corner pile-up, as the Honda rider collided with Haslam causing a domino effect which also wiped out Melandri. It was a thrilling race with a lot of hard overtaking between the same riders who starred in Race 1, Tom Sykes, Max Biaggi, Leon Haslam, Marco Melandri, but it was on the last lap that changed and made the unexpected outcome of the race.

Leon Haslam was leading into the final corner, when Melandri in a last desperate thrust tried to dive up the inside of his BMW team-mate, only to run wide which let Haslam turn into the corner only to find Rea taking advantage of the small gap, the two made contact with Haslam getting the worst of it crashing down and sliding he wiped out Melandri, and the two BMW riders ended up spitting dust and grass with a lot of anger just a few yards from the finish line, Haslam managed to re-start his bike and finish 15th.

It was another day to forget for Althea Racing who saw Carlos Checa attempt a pass on the Eugene Laverty (who would later have a spectacular crash at the Craners) at the beginning of the first lap and clipped him and in the contact wiped out Effenbert Liberty’s Jakub Smrz and his own team mate Davide Giugliano. Checa is now down fourth in the championship.