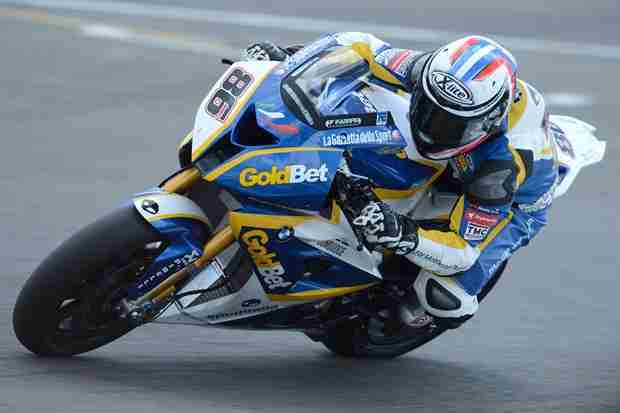 BMW Motorrad Italia GoldBet Superbike Team has faced the second day of the Donington Park World Superbike week-end, that had its conclusion with this afternoon’s Superpole that started at 3pm, decisive for the grid order for tomorrow’s two races. Ayrton Badovini and Michel Fabrizio, following the results obtained, will both move of the third row of the grid, respectively on the 10th and 11th slot.

All of today’s sessions were ran on dry track and with some high-wind blowing, starting with Qualifying 2 – that took place in the morning – that defined the top-16 riders who got access to the Superpole. Michel Fabrizio, despite a crash at “Melbourne Hairpin” with 20 minutes to go, from which he escaped uninjured, has finished in 7th place with a lap time of 1’29.280, while Ayrton Badovini ended up 13th with a personal best lap-time of 1’29.557.

In this afternoon’s Free Practice 2 Badovini had a crash at “Redgate”, the long right hander at the end of the main straight, without suffering any injury. This issue didn’t allow “Speedy” to get back on track before the end of the session but, thanks to the outstanding job and commitment of the team that managed to fix the BMW S 1000 RR as quick as possible. Ayrton managed to take part to the Superpole. Ayrton Badovini and Michel Fabrizio got on track at 15 and qualified for Superpole 2, finished with a tenth and an eleventh place. Leon Haslam and Marco Melandri, riders for BMW Motorrad Motorsport, has obtained the first row of the grid and will start from the second and the third place.

“Up until now it’s been a troubled week-end, Ayrton and Michel’s falls created some extra work for the team, that acted perfectly even though the little time available to sort the bike out. We will start tomorrow’s races from the third row, we need to get some good starts as the race pace is not so bad.”

“I’m not satisfied with the result of the Superpole but I’m quite happy with the race pace. During tomorrow morning’s warm-up we’ll try some adjustment to gain some tenths that separate us from the leading pack, but I’m confident about the two races.”

“After the Free Practice crash, getting back to the right frame of mind was not easy, but anyway I managed to qualify to the Superpole 2. The time of 1’28.6 set with race tyres gives me hope for tomorrow, also because we found the right way set-up wise.”