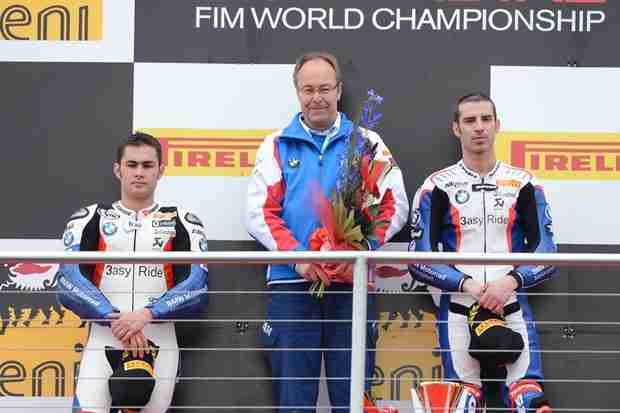 The team from Munich and Stephanskirchen is celebrating its first win in the elite class for production-based motorbikes. Works rider Marco Melandri (ITA) triumphed in the team’s 88th race, crossing the line in Donington (GBR) ahead of team-mate Leon Haslam (GBR), who completed the one-two for BMW. BMW Motorrad continues its rise to the top: after Troy Corser (AUS) claimed the team’s first pole position and podium finish in 2010, Marco Melandri finished runner-up in his very first race for BMW Motorrad and Leon Haslam shone with two podium finishes at the Imola race weekend, the team has now reached its next milestone.

“Congratulations to Marco and the team on this important maiden victory,” said Hendrik von Kuenheim, General Director of BMW Motorrad. “We never expected to see BMW Motorrad leave Donington with a one-two. It is a shame our riders were unable to finish the second race, otherwise Leon would have picked up his first win for BMW Motorrad. The whole team worked really hard to convert the full potential of the BMW S 1000 RR into success on the track. I would like to thank all those involved in the various departments for their tireless efforts. Our goal for this season is to continue to move forward, feature regularly on the podium and celebrate more victories. I am particularly pleased that we were able to win under our own steam. I am also confident that this is just the start of things to come, and that we will see a BMW rider on the top step of the podium more often this season.”

“This one-two is the reward for the hard work put in by everyone involved in this project in recent weeks and months,” added BMW Motorrad Motorsport Director Bernhard Gobmeier. “All the departments are working hand in hand, and the success belongs not only to the racing team, but to all of BMW Motorrad. After reaching this important milestone, our goal is now to back it up and produce the same strong performance in coming races as we have done in Donington.”

“It is an unbelievable feeling,” said Marco Melandri. “It is fantastic to be part of the history of a company like BMW Motorrad. As a kid, I would never have dared to dream of something like this. I would like to thank everyone at BMW Motorrad, the team at the track and everyone involved in this project. We have had our difficulties, but always worked hard and never gave up. We will continue to be fully committed to the cause. I am overjoyed.”

Since making its debut in the Superbike World Championship, the racing version of the BMW S 1000 RR has continuously been further developed and optimised at the sites in Munich and Stephanskirchen. The work is carried out in close cooperation with the production development department. Both sides benefit from a far-reaching exchange of knowledge. Over 100 customer teams around the world put their faith in the potential of the BMW Motorrad supersports bike and have already celebrated many titles and victories in international and national championships.