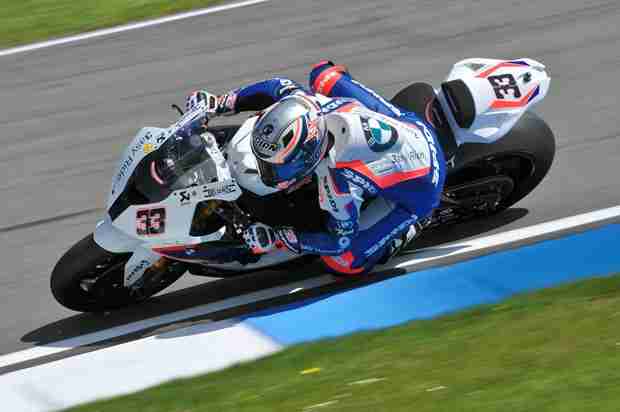 Second and third on the grid: Team BMW Motorrad Motorsport celebrates its most successful Superpole qualifying ever in the FIM Superbike World Championship. For the first time both factory BMW S 1000 RRs will start from the front row for the fifth round of the 2012 season at Donington (GBR). Local hero Leon Haslam (GBR) qualified second on his RR, immediately followed by team-mate Marco Melandri (ITA), who finished third.

In the first part of the Superpole qualifying, Marco only needed one quick lap on race tyres to set the best time and qualify easily for the second session. Leon meanwhile struggled with some issues but was then able to post the sixth fastest time on qualifying tyres. In Superpole 2, Leon was quickest with a new fastest lap on the “Donington Park Circuit” of 1:28.032 minutes, while Marco finished third. In the final and deciding Superpole 3, Leon did another new fastest lap in 1:28.012 minutes, but he was beaten by Tom Sykes (GBR) who was the first rider to get under 1:28 minutes. On his last attempt, Leon rode a 1:27.864 lap on qualifying tyres to secure his second position, while Marco finished third. Leon tackles his home round with a special helmet design: It is the one his father Ron Haslam used to race with and the design of the first helmet his supplier gave him 25 years ago when he was three years old. BMW Motorrad Italia Goldbet SBK Team’s rider Ayrton Badovini (ITA) qualified tenth fastest today, while his team-mate Michel Fabrizio (ITA) will start from 11th on the grid.

“I am really happy to be on the front row at my home race! A big thank you to my team. In Superpole 1, we had a small issue with the bike. After fixing that, we put on a qualifying tyre. Then in Superpole 2, I clocked a new best lap on race tyres and was on P1. In Superpole 3, we decided to use the qualifying tyre right at the end, but Tom was quicker. He keeps going and getting his pole positions! In general, the race tyres were working really well, but we were struggling a bit with the qualifying tyres. The times are very close and I think it is going to be an exciting race. There are a lot of riders who can be fast and for sure racing is always close at Donington. We have been working quite hard on race set-up and are pretty consistent. Now we have to see what the weather does but at the moment I’m pretty happy. ”

“I am very happy. The team and the people back at the BMW Motorrad factory did a great job. To be on the front row again in a dry Superpole here at Donington, a completely different track to Monza, is very important for us. It is great to be back after the issues we had yesterday. Today, I was happy with the race tyre and I felt good. I kept the qualifying tyres for the last Superpole but unfortunately they were not working perfectly; I had some chattering with them although the time was not too bad. Thank you to my team for the good work they did. Now I am looking forward to tomorrow. I will try to be on the podium.”

“So far it has been a really great weekend. Both crews were working hard and both of them were able to successfully react to issues, as was the case with Marco yesterday and with Leon in today’s Superpole 1. To have both RRs in the first row is the result. We are very close to Tom Sykes, and our race pace is good. Both riders have done very fast and consistent laps on race tyres so we are looking forward to exciting races tomorrow.”