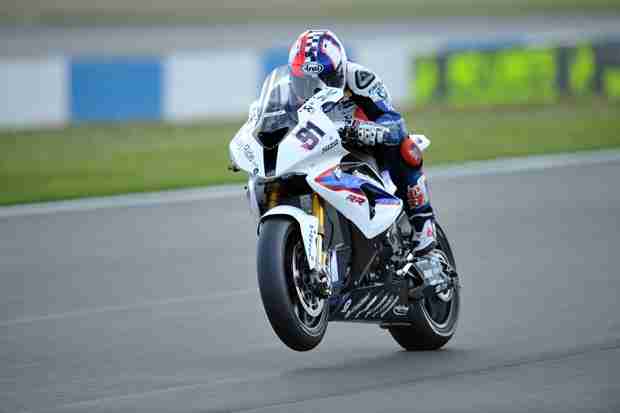 On a very windy Friday at “Donington Park Circuit” (GBR), Team BMW Motorrad Motorsport qualified for the provisional first row. Factory rider Leon Haslam (GBR) finished the closely fought first qualifying practice on his home track in fourth. Just six tenths of a second separated the top 10 riders. Leon’s team-mate Marco Melandri (ITA) qualified provisional 12th. He was prevented from putting in a close to ideal lap time throughout the session and his final attempts to improve were hindered by dirt on the track after other riders had crashed. In the free practice session, Marco was fifth and Leon sixth. The Donington circuit, host of the fifth round of the 2012 season, welcomed the FIM Superbike World Championship with very cold but dry weather. BMW Motorrad Italia GoldBet SBK Team rider Michel Fabrizio (ITA) finished the first qualifying practice in seventh; his team-mate Ayrton Badovini (ITA) was tenth.

“It is great to be back at Donington. The conditions were quite tricky today with the wind and the cooler temperatures. This morning we had a few issues but this afternoon went well. We were consistently fast on the hard tyre and that is why I ended up qualifying in fourth. From that side of things I am quite happy. A big ‘Thank you’ to the guys who did a great job again. We have a few things to try for tomorrow, for example we have to make some small changes to the balance of the bike and work on the set-up but I think these are overall tweaks to make the RR more stable. We will just be working on small things —nothing major.”

“It was a difficult day because at the moment I feel that the bike is quite nervous on the bumps and that it is not easy to ride. It was also quite difficult to ride in these windy conditions, but that was not the reason why I struggled so we have a lot to work to do tomorrow. On the final two laps, I lost the chance to improve my lap times, because after Jonathan Rea crashed, there was a lot of grass and gravel on the track. I hope the conditions are stable tomorrow. Overall, I am confident that we can improve.”

“First of all we are glad that we had two dry sessions after the unpredictable weather we experienced at the previous events. Even though the wind was quite strong, we were able to work through quite a few things. Leon and his crew did a good job. It seems that they have found a good set-up for this track and now it is just a matter of fine tuning. Marco was unable to show his talent this afternoon. It is a pity because this morning, he had a promising start to the weekend but it seems that small changes made to the bike did not help to improve his lap times. If you look at the ideal sector times, the situation is better than the result shows. Marco is losing the time mostly in one sector, but on this track you need to be consistently fast to achieve a good result. We will work hard for tomorrow to give Marco a bike which enables him to show his potential and we are confident that we will be able to do that.”