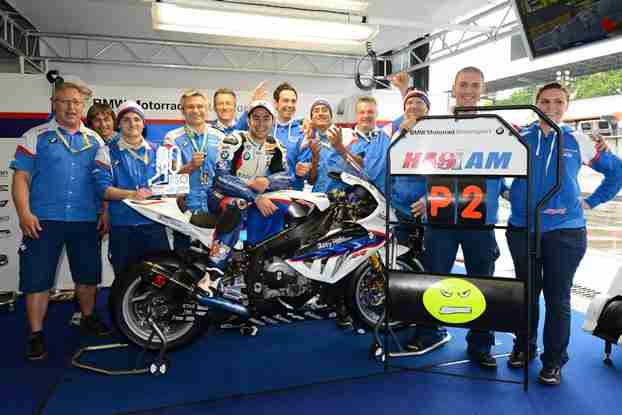 Without time to draw breath in the FIM Superbike World Championship, following a dramatic race weekend at Monza (ITA), “Donington Park Circuit” (GBR) is the venue for the fifth round of the 2012 season (11th to 13th May). The races take place on English soil, but are held under the European flag. Team BMW Motorrad Motorsport is determined to continue its progress to the very top and to fight for the top positions with both factory riders, Leon Haslam (GBR) and Marco Melandri (ITA).

Donington is something of a home race for both of them, for Englishman Leon as well as for Italian Marco. No rider knows the circuit as well as Leon, who grew up and still resides close to the track. Marco also lived just a few kilometres from the circuit for several years, and still feels at home there. The Italian celebrated his first victory in the Superbike World Championship in race one at Donington last year, and went on to finish runner-up in race two. Leon just missed out on a place on the podium, finishing fourth in both races.

In the current 2012 season, Marco lies fourth in the Riders’ Championship with 72.5 points. Leon, who claimed his best ever result on the BMW S 1000 RR with second place in Monza, is sixth with 68 points. Together, the pair has already scored 140.5 points for Team BMW Motorrad Motorsport this year. In the Manufacturers’ Championship, BMW is fourth with 96 points. Only the best result from each race counts towards this championship.

“I really like the track. Last year I had my first win in the Superbike World Championship there. The track is very good fun. The first section is very fast and smooth and the last part is all stop and go and requires hard braking. It is good fun because you have to change rhythm. I think we can enjoy a good race there on our RR, but a lot depends on the weather. I just hope that it will be dry and good weather for us.

Donington is kind of a home race for me. I used to live just a few kilometres from the track, so I have many friends there and good memories. I am looking forward to returning there. I was back there for last year’s race, but have not lived there since 2009, so I miss the place.”

“I really enjoy Donington. Last year we had a tough time, as we nearly had a big crash in race two and the conditions weren’t great but I think this year, with the improvements that we have made at BMW Motorrad, I can look forward to racing in front of my home crowd. We will have to wait and see what the weather will be like, but hopefully it will be a lot warmer than last year.

Donington is renowned for being one of the heaviest braking circuits. You have the first section, which is all fast and flowing with lots of undulations. Then you have the last three or four corners of the track with real heavy braking, tight hairpins so you have a mix of all the different aspects that you need from a circuit. It always produces good races, so I am looking forward to it.”

“After two race weekends with really unpredictable weather we are now facing the next round where we do not know what conditions will await us. Donington is a very special race track. The first part is flowing and the last part has stop-go characterteristics. We are confident that our RR can perform very well there. We are working in the right direction and which we have shown at the last rounds. In the standings, we are not too far away from the top guys so we will do our best to try to be on the podium again at Donington.

For Leon it will certainly be a special race. He will not only have the usual full support from the team but also from all the fans. Marco likes Donington as well. He used to live nearby and celebrated his first victory in the Superbike World Championship there. We expect that both our riders will have good races there and are sure that we can perform well. We just hope that the weather will be stable and that we will not experience another lottery that prevents us from collecting all the points that are possible for us.”

Donington from Pirelli’s point of view

For the Donington round, Pirelli will provide the Superbike riders with three solutions for the front and four for the rear. For the front there will be SC1 and SC2 compounds available, including the P1280 which was found to be an excellent tyre during the tests held on the Monday after the Imola round. For the rear, on the other hand, in addition to the harder SC2 compound solution, Pirelli will have three tyres in an SC1 compound, including the R302 that was tested at Imola, developed to combat cold tearing and wear. The Donington circuit has some downhill curves where the rear clearly has less load. Precisely for this reason Pirelli will bring the new SC1 compound tyre for the front, capable of providing better grip and all of these solutions, developed from the SC1, provide better cold performance compared to the standard SC1.