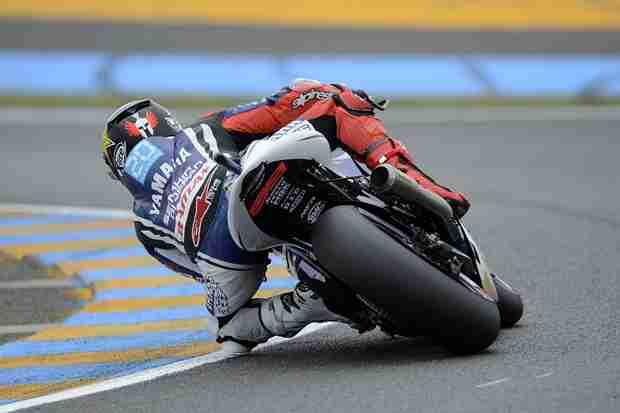 Yamaha factory Racing’s Jorge Lorenzo delivered a master class in wet racing today to take a flawless victory in the Monster Energy Grand Prix de France. Starting from fourth position on the second row, the determined Mallorcan took the lead on the first lap, immediately creating a gap to the following pack. Championship rival Casey Stoner attempted to make a small dent in the time to close Lorenzo down mid race however the race leader remained untouchable. Lorenzo crossed the finish line almost ten seconds clear to take the full 25 points and move eight points ahead at the top of the Championship standings.

Team mate Ben Spies continues to be plagued by bad luck; having made a good start the Texan slid on the start finish line paint, dropping several places. A subsequent issue with his race visor letting in water and reducing vision meant an unscheduled pit stop, allowing the majority of the field past and compromising his race. Spies finished 16th and remains 11th in the standings as they go to Catalunya in two weeks time.

“It was really difficult to hold concentration today, in the dry it’s complicated but in the wet it’s even more. The race feels much longer and you have to remember where the corners are slippery every lap. If you forget one you can crash very easily. I started the race determined to be in first position from the beginning and managed to keep my concentration even when Casey was catching me. It would have been easy to push a bit more and make a mistake at that moment but I waited for a few more laps to see what happened then opened the gap again to win this fantastic race. A big thank you to my team who worked very hard in difficult conditions to make a set up that worked for me.”

“That was a rough race. We actually got off to a good start at the beginning then had a very big moment on the line, something happened because then I had quite a lot of water coming in through my helmet and couldn’t see much on the first five laps. I hoped it would get better but I couldn’t see anything and decided to come in because I need to see where I am going. I knew the race was gone by then so went back out to try and get some data and get better working with the bike in the rain. Circumstances meant it wasn’t a good day.”

“A fantastic result, a great race and a good performance by Jorge. The bike looked very good as well; a lot of grip in the rear and changing direction very well. A big thank you to the team for hard work as in the morning we still weren’t there with what we wanted. We did have a lot of rear grip and the tyre heated up very quickly so we made use of that in the early part of the race, Jorge brought it home nicely!”

“We were expecting a different race but unfortunately this bad luck doesn’t want to disappear. We’re looking forward to Barcelona, we won’t give up and we will get back up to where we belong with Ben. Jorge led a perfect race; he was incredible, especially considering circuit conditions. It’s important to take the Championship lead again so let’s see what we can do in two weeks time.”