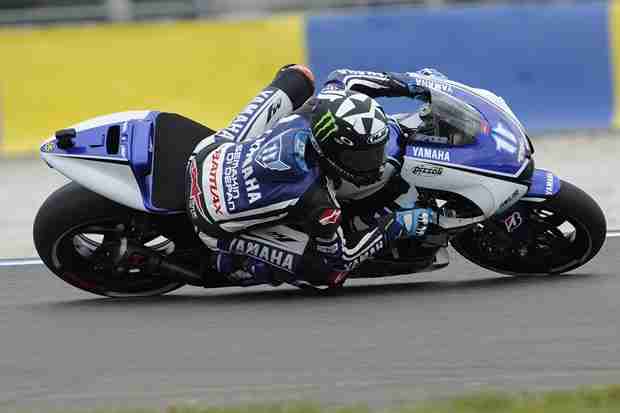 Yamaha Factory Racing riders Jorge Lorenzo and Ben Spies took to the Le Mans circuit today for the first two practice sessions of the French Grand Prix. Although dark clouds threatened to dampen the sessions, the riders were lucky to enjoy dry track time throughout. Lorenzo started the day missing some rear grip from his YZR-M1 on corner entry but was able to make some set up changes and improve in the second session to finish the day third in the combined times.

Spies enjoyed a positive first day at Le Mans apart from a fast crash going into turn two midway through the second session. The Texan rider was unhurt and able to immediately continue the practice on his second bike. A consistently quick pace saw him wrap up day one in fifth place on the combined times.

“This morning we had some difficulty entering the corners, I didn’t trust the bike so much. This afternoon we made some changes to the rear and it improved the feeling and the lap time a lot. I did a half race simulation and we had a good pace. We are now ready for a dry race but everyone says it is going to rain which will completely change the conditions.”

“Today was ok, to be top five both sessions is good after Estoril, especially here where I’ve struggled in the past. I made a small mistake this afternoon, got into turn one pretty fast and was too fast into turn two so couldn’t make the corner. I got on the second bike and was pleased we were still able to go fast as we had a lot of laps on the front tyre. The bike seems to be working pretty well here so we’ll keep going and see what we can do tomorrow.”

“Not an easy first day of practice, this morning we struggled a bit with rear traction, especially during braking. We had the same issue in Estoril and we learned quite a bit there so we were able to make it a lot better. The handling improved a lot as a result in the afternoon. I think we need to make another step tomorrow but we are happy with the pace from the second practice.”

“A good start for Ben today apart from an unfortunate crash in the second session, luckily he was unhurt so we could continue. Ben was able to do a lot of laps on a very used front tyre; this is encouraging for the race. Jorge made good improvements after struggling for rear grip this morning and we expect another step tomorrow. Let’s hope the weather forecast is wrong or today’s work will not be very useful!”