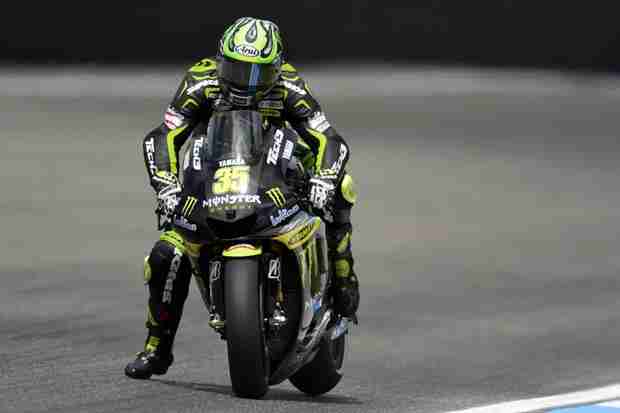 The Tech 3 Racing Team experienced a difficult qualifying session at the Le Mans circuit this afternoon, with Bradley Smith finishing 19th quickest and Xavier Simeon ruled out of tomorrow’s race through injury. Smith will start his landmark 100th Grand Prix from the front of the seventh row of the grid after the Moto2 field served up another closely contested qualifying session at a cool and cloudy Le Mans track.

Smith clocked a best time of 1.39.301, which left him less than 0.5s away from the third row, but as he was poised to try and improve his lap time in the final five minutes, rain spots started to fall on the legendary Bugatti circuit to deny the 21-year-old. Xavier Simeon will not start the 26-lap race after he suffered fractures to his left hand and foot in a heavy crash on his 12th lap. Simeon has been transferred to a Le Mans hospital where he will undergo further assessment after also suffering a heavy blow his to pelvis.

“Starting from 19th place on the grid is not where I anticipated being for my 100th Grand Prix. Obviously it is a special weekend reaching that milestone and this being the Tech 3 Racing Team’s home race, but it was another frustrating qualifying session. I had quite good pace this morning and then we made some changes to the Mistral 610 machine and unfortunately we didn’t make it better. The weather didn’t help when it started to rain at the end and to be honest I won’t be too sorry if it is a wet race. If it rains then we have a chance of being able to fight through the pack, but in the dry it will definitely be a tough race. We’ll analyse where it wrong today and be ready to come out fighting tomorrow. I also want to wish Xavier a quick recovery and hope to see him back on the other side of the Tech 3 Racing garage soon.”