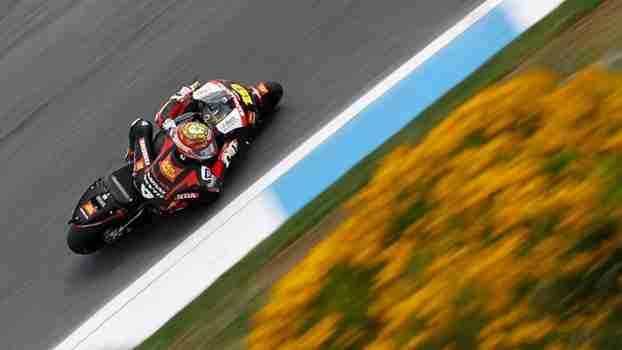 After a positive display in the Grand Prix of Portugal two weeks ago Team San Carlo Honda Gresini heads for the Le Mans circuit in France this weekend looking to make further progress towards the front of the pack. Alvaro Bautista is hoping to improve his feeling with the Honda RC213V and join the likes of Andrea Dovizioso and Cal Crutchlow in their pursuit of the seemingly indomitable top trio of Casey Stoner, Jorge Lorenzo and Dani Pedrosa. The team’s CRT rider Michele Pirro achieved his first goal of scoring his maiden MotoGP points at Estoril last time out and the Italian’s next target is to improve the performance level and reliability of his Honda-powred FTR machine.

“The weather at Estoril finally afforded us some dry track time and we were able to make some changes to the bike and get a good rhythm together before the race. At the start we were struggling for feeling with the front Bridgestone but gradually it improved. In the race I was struggling in T4 because the bike did not feel great in corner entry so I was just focused on holding my position. Now we go to another circuit where the weather is always unpredictable so we have to be ready to adapt. With the data we gathered in Portugal I think we can take another step forward and find a few important tenths to close the gap to the guys in front of us. I don’t really like this circuit, unfortunately. Le Mans has a lot of direction changes, short straights and the worst thing is the low grip levels and cool track temperatures. I have never finished on the podium here in the 125 or 250 classes but hopefully we can have a good race this weekend and improve on the results from Estoril.”

“The memory of picking up our first points at Estoril is still fresh in my mind and I think it is a nice confidence boost for myself and all the guys in the team, who have been working tirelessly on this new project, which we all believe in. We have achieved our first objective and now we need to focus on developing from here. Unfortunately the post-race test at Estoril was cancelled so we missed the opportunity to try some new things but as usual we remain upbeat and look to make up for it this weekend at Le Mans. The circuit is definitely not one of my favourites but that doesn’t matter one bit. We have to try our best to improve and close the gap to the top guys in the championship.”

“The next round takes us to Le Mans, a circuit that holds a lot of great memories for the team thanks to some unforgettable victories over the years. Last year we remember Marco Simoncelli having a great ride before the collision with Pedrosa, which caused all sorts of controversy. Hopefully this year we can pick up in a positive way and see Alvaro taking another step forward. He has been making constant progress lately and just needs a little more to be fighting with Dovizioso and Crutchlow. He is very close to gaining the confidence he needs with the bike to be more aggressive on the brakes and faster in mid-corner. There will be no shortage of effort to keep this positive run going. Two points for the CRT project with Michele Pirro at Estoril was a nice fillip and it brings to an end the first stage of the project, which now continues apace. We have a few new things that we wanted to try at Estoril in the test and even though it is always hard to try these things during a Grand Prix we have to get on with it because time is of the essence. Thankfully Michele and his guys are absolutely determined to improve.”