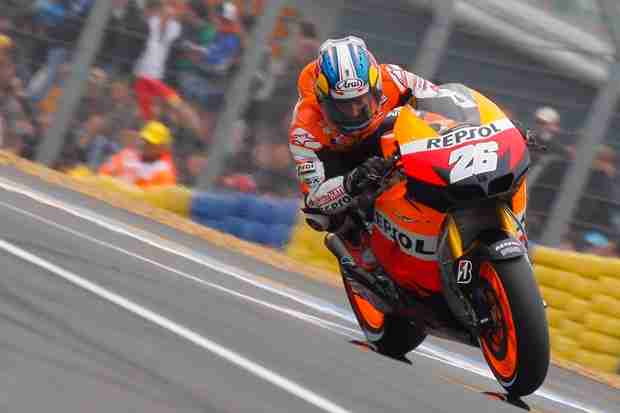 The starting grid for the French Grand Prix was decided on Saturday afternoon, in a qualifying session that featured the added intrigue of mixed weather conditions. Dani Pedrosa took pole position for the race at the Le Mans circuit, and will be joined by fellow Repsol Honda Team rider Casey Stoner on the front row tomorrow. Stoner was second in the afternoon session.

In the morning free practice run, Stoner was the focus for two reasons. Firstly, he suffered a crash whilst quickest in the first sector and second fastest in the second sector of his ninth lap. Entering turn 10, the Repsol rider clipped the rumble strip and lost the front of his Honda, sending him to the tarmac. On his second bike, the Australian came back later in the session and recorded the best time of the morning: 1’33.945. That made him the first rider to breach the 1’40 barrier, and put Stoner almost half a second faster than closest rider Cal Crutchlow. Pedrosa was sixth in Free Practice 3, 0.691 off Stoner.

Rain appeared during the qualifying sessions for each of the three classes at Le Mans, with the low track temperatures not helping with the drying-out process. It would be a session of strategies, as the MotoGP riders took to the track with wet tyres at the start of the run. The two Repsol Honda Team riders led the way whilst waiting for an improvement in track conditions.

With twenty minutes to go, the time had come to mount slicks and make a push for pole position. The lead changed hands frequently between, Stoner, Pedrosa, Dovizioso, Crutchlow and Lorenzo, but in the end it was Pedrosa who came up with the goods. The Repsol Honda Team rider put in the fastest lap of the session on his 20th of 22 turns around the Le Mans circuit, with a 1’33.638 time insurmountable for his rivals. He thus claimed his first pole of 2012. Teammate Casey Stoner was second, three tenths off Pedrosa with a time of 1’33.941 from his 18th of 21 laps.

“I’m not a pole man, so I’m happy to be here for the first time this season; front row is always good and the team has done a great job with the bike. It’s been a difficult session, quite similar to Jerez, the track was drying up but we had some drops again in the last five minutes. So it’s been key to choose the right moment to push and to not get out of the line.

Let’s see what the weather does tomorrow but we have to be ready to go fast in any conditions. The race is very long here, 28 laps, and everything can change during the race, so I hope to have a good start and to be able to keep a good pace until the end”.

“We’re really happy to be on front row, but qualifying definitely didn’t go to plan. The track was drying out and we knew we had the pace, you just had to be a little cautious in some areas that were still holding water. We felt we were fast enough to be on pole position but every time I was on a good lap or building up to one, I got held up. I tried to drop back and give myself some space but I still managed to catch up to a CRT bike in front of me which ruined that lap.

Then the next lap we were doing pretty well but I saw yellow flags and rain so I backed off, unfortunately the rain wasn’t heavy enough to upset my lap and I could have continued it, but that’s the way it goes sometimes.

I think we’re looking good for the race, we’re pretty comfortable in dry conditions but we still have warm up and a chance for the others to find something extra, so we’re going to have to improve our bike a little also and wait for the race as the weather conditions are still unpredictable”.