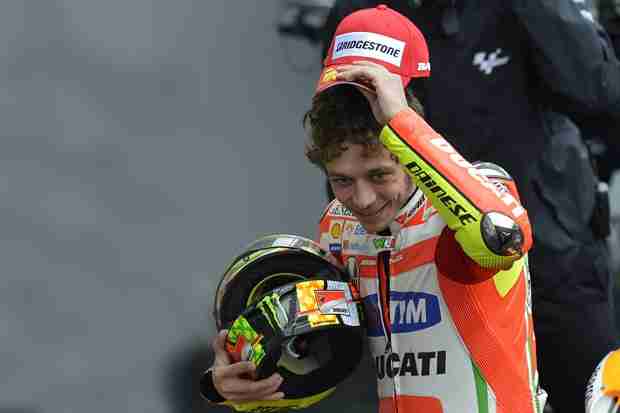 Valentino Rossi was a protagonist in an exciting, hard-fought race in wet conditions during the French Grand Prix at Le Mans, where he climbed from the third row of the grid to the second step of the podium. Nicky Hayden, despite an unfortunate start, worked his way up to sixth by the finish. Having started from seventh place, the Italian advanced to third by lap three, at which point Andrea Dovizioso and Cal Crutchlow joined him in a long battle. He picked up his pace around seven laps from the end, eventually setting the fastest lap of the race and closing the gap to Casey Stoner, who he overtook on the final lap. His runner-up finish behind winner Jorge Lorenzo is his best result with Ducati so far.

Hayden was among the riders who spun their tyres on the inside part of the track just after the start, but he pushed hard the entire race, eventually matching his best result of the year.

“I’m really, really happy. We knew we had a special opportunity in the wet today, so I tried to ride perfectly and not throw it away. I started well and immediately made up some positions, and then I passed the two Yamahas to get behind Stoner. I was able to match his pace, but then my visor started to fog and I had to slow down for a couple of laps until I was able to clear it by lifting it a little. Once I could see again, I re-passed Cal and then Dovi. When I realized that I could really push hard and that it was possible to catch Stoner again, I went for it. It was a great race and a nice, fun battle with Stoner to the last lap. I enjoyed myself and I’m happy for my team and all the guys at Ducati, who are working so hard for me. Now we must continue giving our all until we’re also able to be competitive in the dry. We found a good base to work from in Portugal, and it wasn’t bad in the dry here, either, although not as good as in the wet. Now our main goal is to take another step forward and make up some more tenths.”

“There must have been something on the inside of the track just after the start, because everybody that went on that side either crashed or almost did. My jump was really good, and then just as I was ready to go to second gear, the tyre completely broke loose and the bike started fishtailing. I got buried in the pack and couldn’t see for the first few laps. Once I got through some guys and had a clear track, my rhythm wasn’t too bad. I was bringing Bradl and Pedrosa back a bit, but when I got it down to two seconds, I almost crashed and had to try again. I got to Bradl’s wheel at the end but just couldn’t do anything. It’s frustrating because we’ve got a really good wet bike. I know we had more potential than sixth, but the start hurt me. Congratulations to the team for the podium. They certainly deserve it.”

“We’re very pleased with Valentino’s podium, which is of course down to his beautiful race, although it also reflects the great job done by the team over the weekend. It’s also a thank-you to everyone back home who has worked so hard to solve our problems, which we’re overcoming little by little, although we still need to work on them some more. We’ve worked on the chassis well, and now we’ll focus on other important areas of the bike. Today Vale was in a situation where he could ride as he’s capable of doing, and he gave us a great show. It’s a shame for Nicky, who could have also fought for a better position if it weren’t for his bad start. Despite riding at a good pace, he wasn’t able to climb higher than sixth place. Anyway, Nicky showed that he, like Vale and everyone at Ducati, never gives up.”