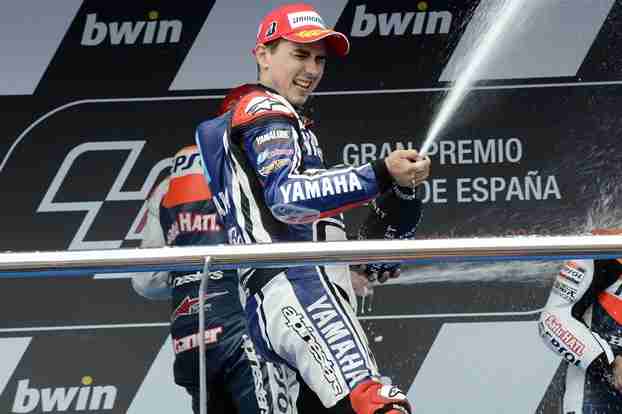 Yamaha Factory Racing rider Jorge Lorenzo continued his unbroken premier class podium run at Jerez for the third year running today, taking second in the Grand Prix of Spain. Starting from pole, Lorenzo initially dropped to third, then swiftly moved up to second by lap three behind race leader Casey Stoner. The gap never grew to more than a second, then closed to just over 0.2 seconds in the last laps. Unfortunately by this point the soft front tyre choice left Lorenzo unable to make a pass. He crossed the line 0.947 seconds behind Stoner, taking 20 Championship points and as a result heads to Estoril leading the Championship by four points with a total of 45.

Ben Spies suffered a second disappointing race today, despite starting well the Texan was unable to find a good feeling from the front end of his M1 and was cautious to push to hard and risk a fall. He took the same result as in Qatar, finishing in 11th to take a further five Championship points, bringing his total to ten and 11th in the standings.

“Today I knew it would be a very important decision on the grid to choose the right front tyre. Finally we chose the soft one, unfortunately we were wrong and had a lot of problems during the race, I wasn’t as confident as in practice. Without good feelings to finish second is not so bad, we are still leading the Championship and have good motivation for Estoril.”

“I don’t really know what happened, I got off to a pretty good start from the line but after that I didn’t have a good feeling with the bike, it was a pretty pathetic race really for me. I’ve apologized to the team and we’ve had a long meeting about what I was feeling with the bike. I just wasn’t comfortable, I rode as hard as I could but the speed just wasn’t there. We need to find something because we can see the Yamahas are working well but my feeling with the bike is not great. It was a bad day at the office today.”

“A very difficult weekend but a very good result, second place was the maximum we could get today. The front tyre was gone so an attack would have been a disaster at the end. We’re leading the Championship and we’re on to the next round. The team worked really hard here in constantly changing conditions to deliver a competitive bike for Jorge.”

“It’s been a very challenging weekend for the whole team, obviously we are delighted with Jorge’s performance, he’s shown great maturity again today to collect the maximum possible points and retain the lead going to Estoril. A disappointing race for Ben, we know he tried his hardest but unfortunately he couldn’t find a good feeling with the set up so was unable to fight with the front groups. We will work hard between here and Estoril to see what we can do to improve this for the next race.”