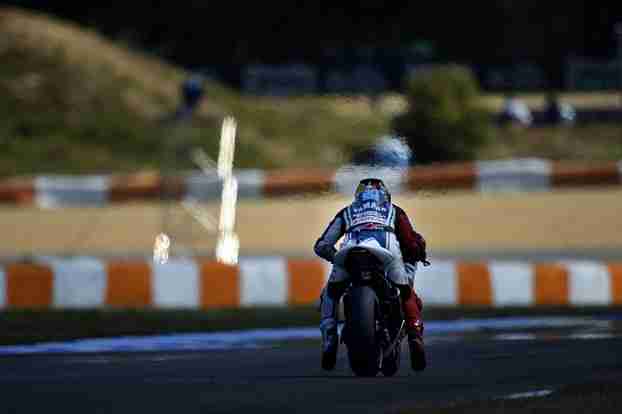 Today’s qualifying session for the Grand Prix of Portugal proved to be a frustrating one for both Yamaha Factory riders. Jorge Lorenzo led for most of the session until a red flag incident between Colin Edwards and Randy De Puniet forced a restart with nine minutes remaining. A mixture of heavy traffic along with a lack of confidence in certain corners resulted in a gradual drop to a grid position of fourth on the second row, just 0.278 seconds from pole. This will be the first time since 2008 that Lorenzo has not started from the front row of the grid at Estoril.

Having finally got his 2012 season firmly back on track with a highly competitive pace, Ben Spies endured an extremely frustrating qualifying session with at least three hot laps interrupted by slower traffic. Having been denied a front row lap time Spies will start tomorrow’s race from fifth on the grid alongside his team mate on the second row.

“The main problem for me today was that in turn one and two I couldn’t enter aggressively so I lost a lot of time in this section. In general the bike is not giving me a good feeling so this lap time was the maximum I could get today. We are in fourth but tomorrow is going to be hard as I have to try to pass Cal who is a hard braker! I will keep thinking positive and see what we can do.”

“It was a tough session for everybody, the annoying thing was that three of my best laps were blocked but that’s just the way it goes. Two of them I think could have been avoided but one of them was just a racing incident. We’re on the second row in the middle and we’re a lot better than we were in Jerez. I feel good on the bike and I just need to keep building the confidence now. Being three tenths behind Jorge at this track is pretty good.”

“It was a tough qualifying, we were on pole up until nine minutes to go so I think fourth looks worse than we actually are. 0.2 of a second is not a lot. We are still struggling on rear grip in corner entry; especially the first two splits so we need to improve the bike. If we can do that we have a good chance to battle at the front tomorrow.”

“We missed the first row but we are pretty close. Traffic compromised at least two or three laps for Ben but overall we are satisfied as we are coming from a really bad weekend. The race will be tough, but we are confident as up to five minutes from the end of qualifying we were really close. Let’s see what tomorrow brings.”