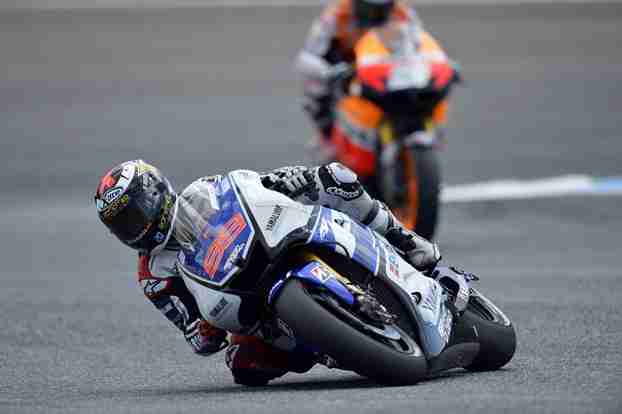 Yamaha Factory Racing rider Jorge Lorenzo continued his unbroken podium record at Estoril today. Starting from fourth on the grid he was quickly into second at the first corner and held the position to the line after a determined effort to stay with race leader Casey Stoner. The Mallorcan’s legendary consistent lap pace meant Stoner was never more than one second ahead until the final lap and at times just 0.2 seconds in front. Lap three of the race saw Lorenzo deliver a new fastest lap record for Estoril of 1’36.909. He now heads to Le Mans in two weeks time just one point adrift of the Championship lead.

Team mate Ben Spies started well from fifth, slotting into fourth in the first corner before running wide and dropping back several places. The Texan made a couple of mistakes and dropped to ninth where he battled Stephan Bradl for eighth, eventually passing the German to take the position at the line. Spies will arrive in Le Mans in 11th position with 18 points.

“I’m happy with this second position because I was expecting to fight for third or fourth and not the victory. The bike improved a lot from the practices so it was possible. I had two problems, at the start I used a lot of clutch and burnt it so for two or three laps it was burning and I lost a lot of distance from Casey. Also at the end Casey was very strong. After this everything was working well and I made a fastest lap, which is not very common for me. We are just one point behind Casey, hopefully we can improve something on the bike tomorrow and be in front again.”

“Very mixed emotions today, this is actually the first time in three years that I’ve finished a race here. As I told the team, I made four or five big mistakes during the race, they cost me time and places. It was a rough race but I’m continuing to build my confidence, I don’t enjoy Estoril so I’m happy to have finished. Now we go to Le Mans which is a great event with an amazing crowd but another track I don’t love so much! I’m happy with the bike and it’s performance so we’ll continue to build my confidence and improve the results.”

“A fantastic result after a very tough race weekend. Both Jorge and the bike got on very harmoniously in the race and he was able to push. We are only one point behind Casey and we’re consistently finishing on the podium which is important. We’ll test tomorrow to see what developments we can use to improve and see what happens in Le Mans in two weeks time.”

“Ben had some difficulties during the race, he made a few mistakes, I think the first one put a lot of pressure on him so he was trying to push harder and was unable to. The most important thing is he got back his feeling and was quite satisfied with the set up which gives us good confidence for the coming races. Tomorrow we will test some new items, let’s hope they give us some good results. Jorge did a really great job and pushed really hard. He never gave Casey room to breathe and he couldn’t do more than that. This is the right attitude to get the title.”