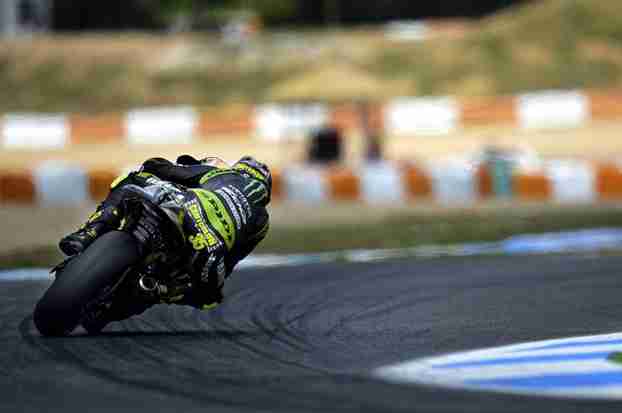 Monster Yamaha Tech 3 Team rider Cal Crutchlow stormed to his second front row start in the opening three rounds of the 2012 MotoGP World Championship with another scintillating qualifying performance in Estoril today. Only reigning World Champion Casey Stoner and 2011 Estoril winner Dani Pedrosa were quicker than the British rider, who maintained his incredible qualifying record this season to finish top non-factory rider and leading Yamaha on the leader board.

Crutchlow hasn’t qualified lower than fourth in 2012 and once again this afternoon he challenged for pole position in the thrilling final stages of a session that was red flagged with 11 minutes remaining following a collision between Randy de Puniet and former Tech 3 Yamaha rider Colin Edwards.

The short delay in proceedings didn’t knock Crutchlow out of his stride and five minutes were left on the clock when he surged to the top of the timesheets with a lap of 1.37.289. That time kept Crutchlow at the top of the standings until just over two minutes remained and at the end he was only 0.101s behind Stoner and 0.088s adrift of Pedrosa.

Andrea Dovizioso will start tomorrow’s race from the front of the third row of the grid having set the seventh quickest time. The Italian was disappointed with his pace on the soft Bridgestone tyres in the decisive final moments of the session. Bur he remains confident he will be challenging for a third successive top five result tomorrow having been one of the fastest and most consistent riders on the hard compound Bridgestone rubber.

“To be back on the front row again is a really great achievement for the Monster Yamaha Tech 3 Team and this is reward again for all of our hard work. I am really happy as well to be the fastest Yamaha because that proves what a good job all of us are doing. I was on the hard tyre for the first part of the session working on the race set-up and it felt a little different to what I am used to, but we made a lot of progress with the bike during the session. I felt really comfortable and confident on the soft tyre and felt I could be fighting for the front row. I was actually going to scrap my best lap bu t I made up some time in the last sector and it was good enough for the top three. I’m happy with that but we still have to improve the bike a bit more for the race. I want it to turn a little better and brake a little better. I am looking forward to the race but it is going to be a difficult job. We know Jorge is going to be there and a podium will be very hard but as always I’ll try my best.”

“I’m quite angry to have qualified down in seventh today because we could have done much better. It is always tricky when you have to start from the third row of the grid and I hope my starting position is not going to hamper me at the start of the race. Getting a good start will be crucial but I am really satisfied about my pace on the hard tyre. I was third fastest and only 0.2s behi nd Lorenzo on the hard tyre, so I think my rhythm for the race is going to be very competitive. Qualifying didn’t go quite according to plan. I had a small problem with one engine so we had to check that and switch to the second bike in the middle of the session. And when I went out on the new tyre there was the red flag. I think without a couple of issues we could have been higher up the grid. I feel we have made a lot of progress this weekend, but unfortunately that hasn’t been reflected on the timesheets.”