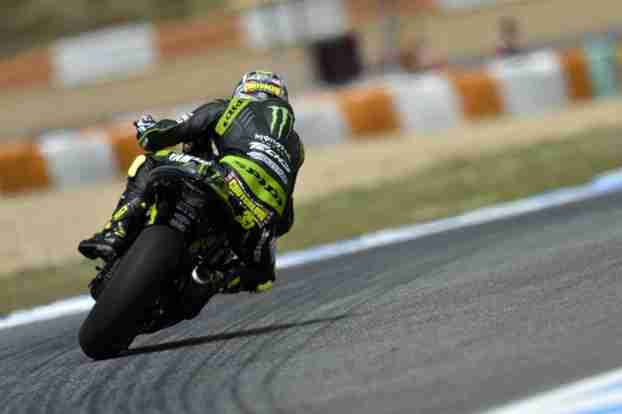 Cal Crutchlow’s phenomenal start to the 2012 MotoGP World Championship continued in impressive fashion in Portugal this afternoon, the Monster Yamaha Tech 3 Team rider finishing third quickest after the opening two practice sessions. The British rider completed just five laps in tricky conditions this morning when treacherous wet patches left by overnight rain prevented vital work on the race set-up of his YZR-M1 machine from being carried out at the 2.599 miles Estoril circuit.

In cool but dry conditions this afternoon, Crutchlow del ivered another stunning performance to back up his fantastic fourth place finishes in Qatar and Jerez, and the former World Supersport champion was challenging for a top three placing throughout.

He ended with a best time of 1.38.742 to easily finish top non-factory rider on the leaderboard and he was only 0.025s behind factory Yamaha rider Ben Spies. Crutchlow’s pace was only 0.346s off the fastest time set by reigning World Champion Casey Stoner and he is confident that he can convert his early weekend speed into a top five challenge on Sunday. The dry conditions this afternoon were a welcome boost for Andrea Dovizioso, who is concentrating on fine-tuning his riding style to best suit the Monster Yamaha Tech 3 machine.

The Italian rider has impressed with top five finishes in the op ening two rounds in 2012 but he still believes he can make significant strides in improving his confidence and feeling with the YZR-M1. He tried a different swingarm this afternoon and finished with a best time 1.39.615. That put him 10th on the combined timesheets and he is optimistic he can lap considerably faster with further modifications to his bike ahead of tomorrow’s final free practice and qualifying.

“I’m happy with the way we have started this weekend. This morning was similar to the first session in Jerez and we couldn’t really learn anything with the track being so damp in parts. The problem was the patches were really big at the last corner and to be honest it was pretty dangerous, so we might have to look at that in the Safety Commission. We never changed the tyres from this morning to the afternoon and that is a big plus. For that reason I’m really happy with the pace I was able to set, especially because we know that some other guys did put in a new tyre at the end to go a bit quicker. We were just concentrating on working on the race set-up and we still have plenty of margin to improve. The first two races have given me a lot of confidence and I am looking forward to carrying on the good start this weekend.”

“We tried a different swingarm on the second bike during my last run and when we made this modification we also changed the rear tyre, but it did not get to the right temperature. We tried to find out if the swingarm or the tyre was the problem but because of this situation we lost quite a lot of time and I am a bit frustrated because until that moment we were close to the fastest time. I was feeling well on the bike and I was sure I still had some margin to improve my time. It is important to try the parts to help us improve and we will be in a better situation tomorrow. I just hope that we will have good weather to continue the work we started this afternoon.”