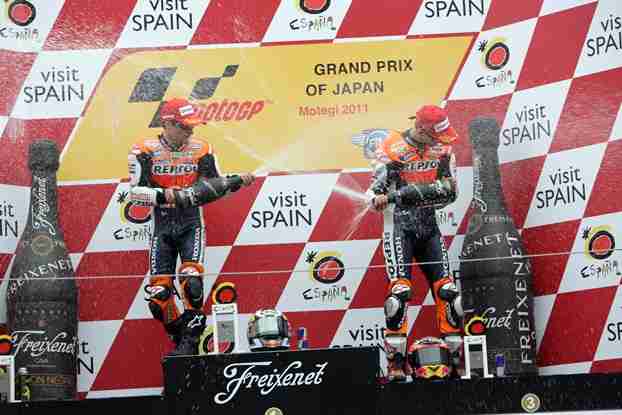 The Repsol Honda Team had an historic race at the Portuguese Grand Prix. Reigning World Champion Casey Stoner dominated the contest right from the opening lap, crossing the line 1.421 seconds ahead of second placed Jorge Lorenzo. Dani Pedrosa earned his 100th World Championship podium with third place. With this latest victory at the Portuguese Grand Prix, Stoner has now won at every circuit on the current calendar in the MotoGP class.

With this third position, Dani Pedrosa joins an elite club of riders with 100 podiums to their name. Only six competitors have acheived the milestone before the Repsol rider: Valentino Rossi –175 podiums–, Giacomo Agostini –159–, Ãngel Nieto –139–, Phil Read –121–, Mike Hailwood –112– and Max Biaggi –111–. What’s more, at just 26 years of age he is the second youngest –after Rossi– in reaching his century.

Since his debut in the World Championship in 2001, the three-time champion has not stopped picking up triumphs. That year he stepped onto the rostrum for the first time and now, eleven years and 179 races later, he is celebrating a hundredth podium. His most successful track for top three finishes is Ricardo Tormo in Valencia, where he holds seven podiums divided across the three categories in which he has competed.

The 2012 season has just begun and the Repsol rider has already claimed top three finishes in the opening trio of Grands Prix. The celebration of his 100th podium will serve as an extra motivation for Number 26 in his battle for the title in the remaining fifteen events. The third position takes Pedrosa to third in the overall standings, 14 points behind Repsol Honda teammate, Casey Stoner, World Championship leader.

“It’s been a really tough race from the beginning, the pace was very very high from the first lap to the final one. Casey did a good race, unbelievably strong. I had a big shake in the first braking area, Casey and Jorge overtook me and I lost 1.5 seconds on the first lap. During the race I had some issues in the middle of the corner, I was not fast with corner speed; each lap I tried to get a little better, to try and modify my riding style, the mapping, braking later, I tried everything, I managed to match the lap times but not to close the gap.

Three races on the podium is very good overall, but in three races we missed something, so let’s try it again in the next one. To reach my 100th podium is amazing and shows how fast the time goes. I’m very happy for that and I want to thank all my teams and sponsors during this time and especially Honda because I’ve been with them for my whole career”.

“In the end it was another fantastic weekend for us. This morning we were more confident but also a little concerned because yesterday afternoon when we had a very similar setting to FP3 the bike was a little bit worse in the warm conditions. In warm up we didn’t have a big problem with chatter but then for the race, under the warmer conditions, we struggled a lot more. This was very difficult to ride with, in the first part of the race I was confident and attacking the track but I closed the front twice due to the chatter.

From this point I backed of a little, tried to stay smooth and just wanted to stay in front of Jorge and Dani, but Jorge was coming strong. I had to try and keep my pace and not make too many mistakes, I was changing the mapping to try and reduce the chatter problem. Towards the end of the race I began to understand how to ride around it, this made things smoother and I found some more pace and was able to bring it home for a great race win”.