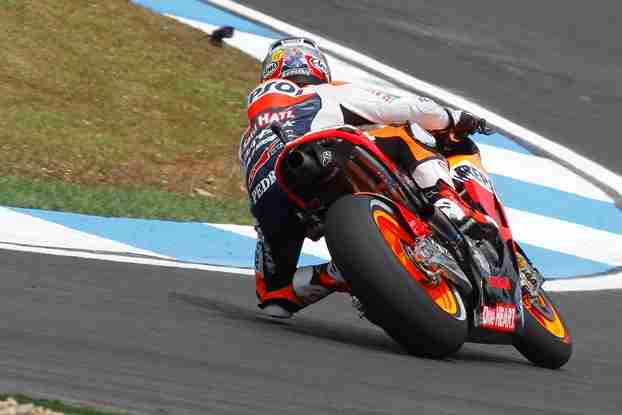 Five days on from occupying the top step of the podium at Jerez, Casey Stoner kicked off the Portuguese Grand Prix weekend with the fastest time on day one of free practice. A morning session on a damp track awaited the riders in the morning, although the majority of participants preferred to put down few laps until the drier afternoon run, in which the Repsol riders made the most of the improved conditions to set the pace. Stoner ended day one with the fastest time: 1’38.396, whilst Dani Pedrosa was fourth quickest with a lap just four tenths slower.

Few riders opted to go out on track for the beginning of the first session at the AutÃ³dromo de Estoril, as the track had been left damp from overnight rain. Casey Stoner and Dani Pedrosa were two riders who waited in the garage in the early stages, only having time to perform a few laps when the track had dried out sufficiently towards the end. The Repsol riders were fourth (Stoner) and eighth (Pedrosa) in the morning run.

With the track completely dry for the afternoon practice, there was far more positive work done in preparation for race day. Dani Pedrosa shared the spotlight with Ben Spies in the early going, the two occupying the top positions until the midway point of the session. That was when Casey Stoner stepped things up a gear and was able to put himself at the head of the timesheet on his seventh lap. Things stayed the same until the end of the hour, with Pedrosa just four tenths of a second behind in fourth.

“It was quite similar to Jerez, in the first session we were almost unable to ride and in the afternoon it was difficult because the track conditions were poor, it was very slippery, we had no grip in the front or rear and it was kind of hard to get feedback from the bike because the tyres were just sliding. Water is holding on the new asphalt, so it’s necessary to change the line.

It would be good if it doesn’t rain anymore and if they could dry this area up in some way because in the last corner especially, it’s very damp. I hope the track gets better tomorrow on the grip level, so we can start working hard on the suspension. As long as the track improves, the bike will do also”.

“We did a few laps this morning to try and understand the bike, to make sure everything was working and like Jerez we wanted to see where the wet patches were on the track. Then this afternoon, unfortunately there were still areas of the track that hadn’t dried out but we managed to get some good dry time, the bike seems to be working ok at this point and we have a fairly good idea of what we need to do tomorrow”.