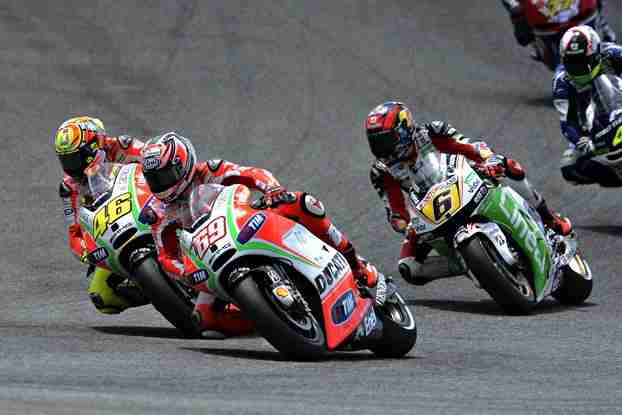 The Portuguese Grand Prix saw the Ducati Team improving with Valentino Rossi and unfortunate with Nicky Hayden. After two days of working on his GP12’s settings, the Italian lapped at a pace that was both relatively fast and very consistent, eventually finishing in seventh place, which is his best result of the season so far.

Nicky Hayden, on the other hand, had to just try make it to the finish due to an electrical problem with his bike’s ECU, which was subject to interference from a radio signal near the track. As a result, all of the electronic calibrations were out of phase around the circuit, making riding extremely challenging. The American nonetheless rode with great determination to an eleventh-place finish. Tomorrow the Ducati Team will remain in Portugal for a one-day test, with hopes that the rain forecasts turn out to be wrong so that development can continue on the GP12.

“It went a bit better this time, in the sense that we started from a better base on Friday and we managed to prepare for today over the course of the weekend. I was able to approach the race knowing what to expect from the bike, and I therefore managed to push harder and get a little closer to the limit. The first laps were decent. I moved up a couple of positions and then I maintained a consistent pace, doing times that we expected to do. We can say that we took advantage of our current potential, and now we’ll have to work to make another step forward. We must improve on corner exits and on acceleration because right now we’re not able to be as effective as the others due to the fact that we can’t get all of the power to the ground. We have a test tomorrow, and we’ll start working. Anyway, today I even managed to have some fun.”

“Starting from the first lap, there was an electrical problem and the bike didn’t know where it was on the track. I tried my best to ride around the problem and not make mistakes. It’s really a shame to work hard all weekend but not be able to take advantage of it with a result in the race. The team did a great job overnight, and I felt so much better this morning in the warm-up. I almost matched my qualifying lap and was pretty consistent. Of course I’m not saying I was going to fight for the win, but it would have been nice to at least have a decent race. We’ll focus on tomorrow’s test now and look forward to the next race at Le Mans.”

“We managed to work well this weekend, taking full advantage of our dry track time to improve the setup and confirm that we now have a good base setting. Today Vale rode the whole race at close to the same pace as his qualifying time, he made some nice passes, and he was able to push a bit closer to the limit. I think this is a good starting point. We’re really sorry for Nicky because during the race, a radio signal interfered with our ECU’s transponder, forcing him to ride with the electronic calibration out of phase. Riding in those conditions is truly difficult, and he did a great job to finish the race.”