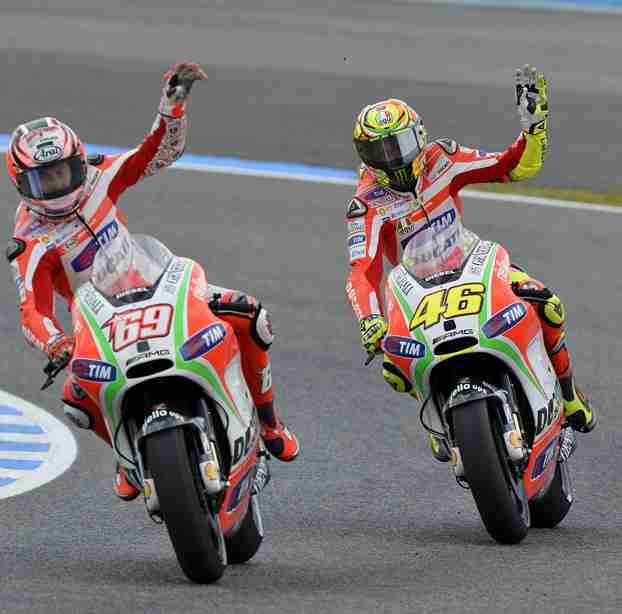 The Ducati Team has transferred to Portugal for the third round of the MotoGP World Championship, which will take place on Sunday at Circuito Estoril, a track that, despite being notable for having the slowest average speed on the Grand Prix calendar, also includes some very fast sections like Turn 5, which is taken at approximately 200 Km/h (125 mph).

In twelve premier-class races at the circuit, Valentino Rossi has won five times and scored some additional podium finishes, while Nicky Hayden’s best finish there was a fourth place in 2007. The team will remain at the track on Monday for a post-race test.

“I like the Estoril track. It has some sections that are a bit tricky and the weather can be very unpredictable, but I like to race there. We had a decent race in Portugal last year with the Ducati, and we hope to do the same this Sunday. The plan is to start on Friday with the setting that we used in the race at Jerez, as I think it has some more potential for us to work toward. We’ll see if we can take a step forward and improve our result somewhat.”

“There hasn’t been much time since Jerez, which is good, as I enjoy back-to-back races. I rode to Portugal in the motor home, and it was a really short, easy trip. I can’t say that I love or hate Estoril. It’s a tight track with a little bit of everything, and the wind can be challenging. My favourite part is the fast corner in the back, but the rest of it is pretty normal. I’m looking forward to Friday. We’ll see what the weather’s going to be like, as it’s pretty unpredictable here. What we don’t need is exactly what we had in Jerez: mostly wet sessions and then having to go into a dry race. It’s clear we need the whole weekend to try to sort some things out and put up a better fight on Sunday.”

“I wouldn’t be surprised if we find conditions in Portugal to be similar to those we left behind at Jerez, but although we went well in the rain there, we hope for a weekend with nice weather this time, which would allow us to take full advantage of all the available track time. The Estoril GP will be important for confirming that we’re on the right path in terms of the GP12’s setup, with both Vale and Nicky. Then on Monday we’ll have a day of post-race testing during which we can make some more checks as we continue our bike’s development.”