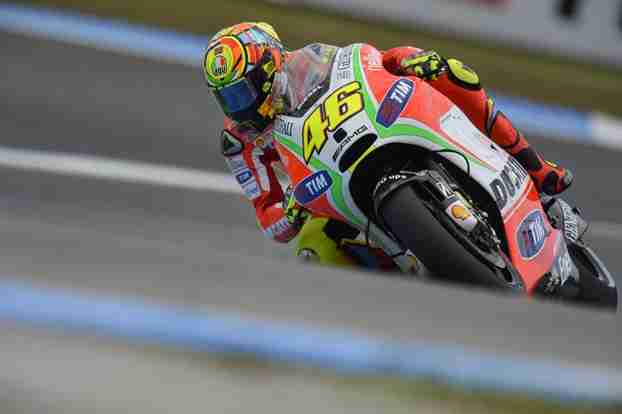 Weather conditions were typically fickle for Estoril during the first day of practice at the Portuguese Grand Prix, with the first MotoGP free-practice session marked by a damp track, whereas the surface was mainly dry in the afternoon. Nonetheless, Ducati Team riders Nicky Hayden and Valentino Rossi were able to gather valuable information that should be useful over the weekend and in the future.

Both riders opted to spend much of the morning session in the garage, but when they ventured out near the end, Hayden and Rossi set the second- and third-best times, respectively. Although they were seventh and ninth in the afternoon, both riders were able to ride near their limits, and their gap to the front was reduced compared to most of the previous dry sessions this season.

“Conditions weren’t perfect this morning, but since they were calling for a good chance of rain in the afternoon, we thought it was worth having a look toward the end. The track was patchy, but I’ve got to say that Bridgestone’s new tyre is much better and safer in those conditions. This afternoon, the track was completely dry except for water seeping up in the last corner, which made it tough to see the line. We made a couple of gains during the session, but I felt like the time went by really quickly. We’ve still got a lot of work to do, especially in the side-to-side sections, where I’m having some difficulty changing direction. Hopefully we can do a good job with the data tonight and be more consistent tomorrow.”

“We had a decent start to the weekend because I was able to ride the bike pretty well, I didn’t finish so far from the front in terms of lap times and, most importantly, I was fast in several sections of the track. I’m only losing a lot in the last split, T4, so along with the technicians, I’m trying to understand why I’m having such a hard time in the last corner, where there’s very limited grip and the back of the bike slides a lot. Still, I can brake hard and enter the corners pretty quickly, and if we’re able to fix the rear, we can get closer. Our goal is to try to be competitive around the entire track. We’ll see what the weather is like, because this morning’s mixed conditions were difficult, and then they were better in the afternoon. Although we went well in the wet, we hope the weather stays nice and that it will be completely dry on Sunday.”