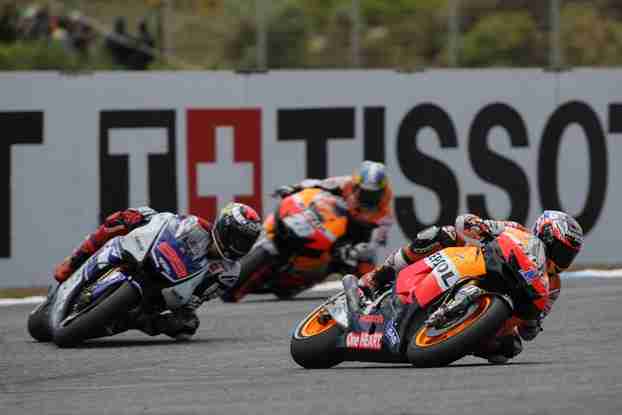 Casey Stoner finally broke his ‘no win’ streak at Estoril by winning today’s MotoGP race. Dominating from pretty much the start to finish, and despite being pressured from Jorge Lorenzo for almost two thirds of the race, Stoner held his nerve till the end and won in quite the style.

The race in itself was processional, very reminiscent of the 800cc era with almost no passes except at the start when riders were jockeying for positions and a few crashes from some of the CRT riders in the back field. This is the Australian’s second straight victory, while Jorge Lorenzo was second and Dani Pedrosa took the third spot on the podium. A special podium for Dani, this being his 100th. The Yamaha Tech3 duo once again battled it out between themselves, but this time Andrea Dovizioso got the better of Cal Crutchlow. Alvaro Bautista took a very lonely sixth, while Valentino Rossi was today’s best Ducati rider with his 7th place despite having the pace of the three satellite riders who finished ahead of him.

Ben Spies had another tough and almost anonymous race finishing 8th and having to battle with MotoGP rookie Stefan Bradl for the spot. Hector Barbera closed out the top ten finishing ahead of Nicky Hayden and more than a minute adrift from Stoner and after a suffering Karel Abraham crashed out with five laps left in the race. The best of the CRT riders was Aleix Espargaro in 12th who got better of his battered and bruised team mate Randy de Puniet by over 3 seconds, while Michele Pirro was 14th. Bringing up the rear was Danilo Petrucci in 15th who was lapped by the front runners. Ivan Silva who had a horrific looking highside in this morning’s warm-up pitted, while Mattia Pasini lost the front of his Aprilia at the ‘Esses,’ and Yonny Hernandez had a high speed crash at the Parabolica Anterior.