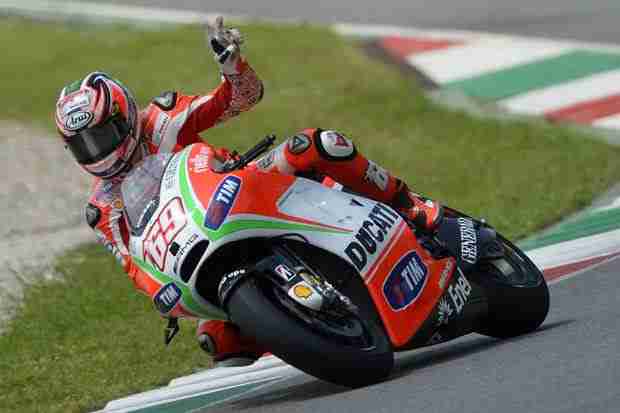 The sun was out for the second and final day of a test at Mugello for the two Ducati Team riders, allowing them both to work hard the entire day, with just one break when the temperature was highest. Valentino Rossi and Nicky Hayden turned 76 and 81 laps, respectively, trying different configurations of the engine, electronics and chassis, among which was a new aluminum swingarm. The next test for the two Ducati Team riders is scheduled for 4 June in Barcelona, the Monday after the next Grand Prix, with another test set for 6 June at Aragon in order to make up the day lost to bad weather inPortugal.

“I’d say it was a very useful test because we were able to gather interesting information on the different areas of the bike for which we had planned a robust test program,” Filippo Preziosi said. “We worked on different configurations of the electronics, engine and chassis, including an aluminum swingarm. Now we want to go to other tracks, which is exactly what we’ll do in Barcelona and Aragon, to test the validity of the solutions we’ve found, in order to understand if we’ve effectively taken a small step in the right direction.”