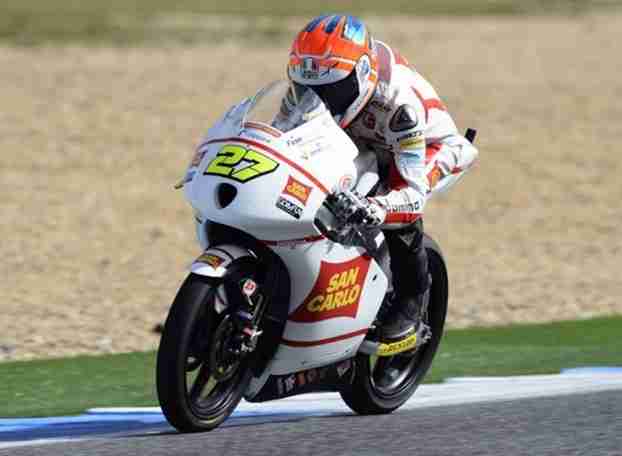 NiccolÃ² Antonelli, the youngest rider in the MotoGP World Championship, is looking to spring another surprise at Le Mans this weekend after announcing his arrival with an impressive sixth place last time out at Estoril. After building his confidence with the FTR-Honda machine in Portugal the youngster is looking forward to improving his performance levels at what is an entirely new circuit for him.

“Estoril was an important weekend for me because we managed to perform to a good level. It was definitely my best race so far because I didn’t make a great start but I stayed focused and managed to run with the lead group and fight for fifth place to the end. We still need to work hard with the set-up of the bike, especially because I am carrying a ten-kilo ballast, which we need to find a better position for in the chassis so that it doesn’t affect the bike so much when the tyres are worn. Anyway, I am confident that the team can find the right setting for Le Mans and that I can take another step forward. I don’t know the circuit other than what I have seen on the television but it looks like a technical track. I will try to learn it as quickly as possible so that I can start to concentrate on the bike.”

“NiccolÃ² was exciting to watch at Estoril and at Le Mans we will finally have our ‘own’ bike because for the last two races we have been using a prototype version loaned to us by FTR. So at Le Mans the guys in the team will be working hard to give NiccolÃ² the bike he needs by finding a permanent home for the extra ten kilos that he is forced to carry. We’ll be working hard to give NiccolÃ² a competitive package that should allow him to take another step forward.”