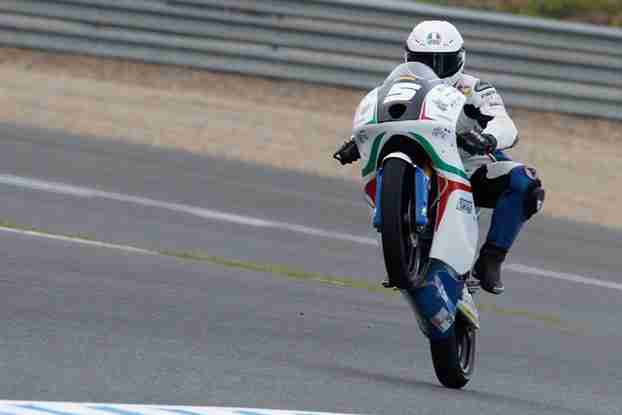 Today’s Moto3 race at Jerez was declared dry and everyone started with slick tires. But the it became a crash fest with damp patches catching out a vast number of riders, so many that it became almost impossible to count (17 at the end), but it was rookie Romano Fenati who not only survived the highly treacherous conditions but did it in a totally dominating way, taking his maiden victory in his second ever GP race. “Fenny” was not only the quickest rider on track (he set his fastest laps in the finale) he rode under the chequered flag with lead of over 36 seconds over Luis Salom who took the 2nd spot on the podium.

Luis Salom who was 19th on the starting grid grabbed the 2nd place on the podium after a three-way battle with Sandro Cortese and Alex Rins. Alexis Masbou took fifth followed by Maverick Vinales who ran through the gravel trap on lap 3 but was able to recover and charge through the remaining field and battle to sixth, but he had to concede the leadership to a superior Fenati. Alberto Moncayo and NiccolÃ² Antonelli who were 7th and 8th respectively followed by Hector Faubel and Zulfahmi Khairuddin who closed out the top ten.