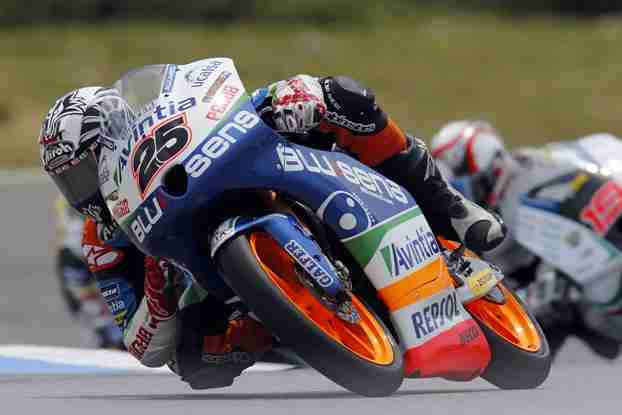 Just four days on from the race at Jerez, the World Championship returned to action at the AutÃ³dromo de Estoril, Portugal. In front of his home fans, Miguel Oliveira was the fastest in Moto3 in Friday practice, with MÃ¡verick ViÃ±ales fourth quickest. Ãlex Rins and Ãlex MÃ¡rquez –the latter in his second wild card appearance– placed fourteenth and twenty-third, respectively.

The day began with two clear protaganists: Miguel Oliveira and Maverick ViÃ±ales. The Repsol duo were the most comfortable in a session on a wet track courtesy of overnight rain. Dropping lap times consistently, it was Maverick ViÃ±ales who claimed first place in the session at its conclusion. His time was 1’56.138, with the Portuguese competitor 3 tenths down. The duo were more than a second faster than the third-placed rider. Rins and MÃ¡rquez –riding at Estoril for the first time– were eighteenth and nineteenth, respectively.

In the second session, on a dry track, Oliveira continued to show excellent pace in the same way as in last weekend’s Spanish Grand Prix, recording the fastest time of the day: 1’48.497. After 18 laps and with some problems on the exit of the slower corners, ViÃ±ales was fourth quickest and 841 thousandths of a second slower than the local favourite.

Ãlex Rins had only briefly ridden at Estoril in a selection progress for a cup competition a few years ago. Today he was fourteenth overall, with a final time of 1’50.653. His teammate, Ãlex MÃ¡rquez, was twenty-third on his first time at the Portuguese circuit, looking to make a big step forward tomorrow on day two of practice for the Portuguese Grand Prix.

“It was a very good day of practice sessions –above all in the opening session, in which we immediately found a good feeling with the bike in the wet. We lacked a little grip in the evening, especially on the exit of the corners. The first and second sectors are places where we can still find some more speed. We lost our way a little in the dry at Jerez and here we are finding it again. We will have to work more on the chassis tomorrow and go out there with the same desire as we did today.”

“We can be happy with this first day of practice. In difficult conditions in the morning, we took the second best time. In the afternoon we were able to put the slicks on, which gave us the opportunity to take our work forward and improve on our times. We went about things calmly, looking for the best feeling possible with the bike –together with my team we continued progressing and were able to put down a very fast pace.

We still have room for improvement in terms of the setup, so we have to keep on working in this way which is obviously working. The last sector is making a fast lap difficult for all the riders, but that’s what Estoril is like.”

“The start to this Grand Prix is very similar to Jerez, because in the morning we had a practice session in the wet. I just need to adapt to the circuit, although we are improving lap-by-lap. The team is doing a great job and I am very happy to have their help. Estoril is a very technical track with bumps all over the place and slow corners, so we have to keep working to adapt to it. In any case, the conditions are the same for everyone and we just need to improve.”.

“I’m not very happy. I end the day with the feeling that I didn’t achieve what I should have. I am very demanding, but I also recognise that things aren’t all bad. We just need a little more track time and adaptation to the bike. We have to improve my riding and the bike, but this is just a question of time. I am sure that we will improve our times tomorrow. In the morning we had our work delayed slightly by the rain, but we will keep taking gradual steps forward. Here in Portugal I already feel more comfortable, because it is my second Grand Prix.”.