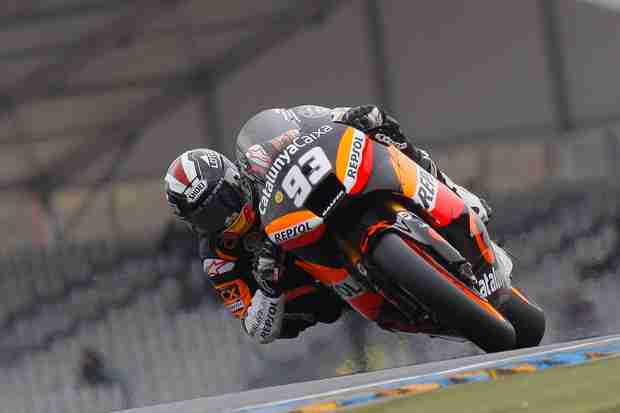 The Moto2 French GP was a natural continuation of the preceding Moto3 race, with a wet track and numerous crashes that gradually took riders out of the running for the win. Marc MÃ¡rquez opted for a patient strategy and took a cautious approach to the opening laps, completing his opening time around the Le Mans circuit in eighth. However, despite his plans, the Spaniard crashed out on lap eleven when in fourth place, forcing him to retire early to his garage.

The weather played an important role in the Moto2 contest. Once the lights went out, the Repsol rider was prudent and made a special effort to avoid early traffic on the opening lap, but an unavoidable collision with Alex de Angelis dropped him down to eighth.

MÃ¡rquez kept his patience and moved up the order, ascending to third off the rear wheel of Scott Redding. However, on the eleventh lap he crashed out at turn ten, having just been overtaken by Johann Zarco. The Repsol rider picked up his bike and looked to rejoin the race, but was obliged to retire. With this latest result, MÃ¡rquez concedes the World Championship lead to Pol EspargarÃ³, whose sixth place took him one point clear of his compatriot. The fifth round of the season –the Catalan Grand Prix– takes place on June 3rd.

“It rained in the warmup and I felt good, but there was a lot more water on the track in the race and I didn’t feel as comfortable as in the morning. I made contact with De Angelis and a number of riders got past, so I decided to take things with calm and keep regaining confidence. That’s what riding in the wet is all about. I was feeling comfortable and steady on the bike, then suddenly a small mistake made the bike slide abruptly from the rear and I couldn’t stop it. The positive is that we are still just a point of the lead and now we have experience in the wet. Now we will focus on MontmelÃ³ –I can’t wait”.