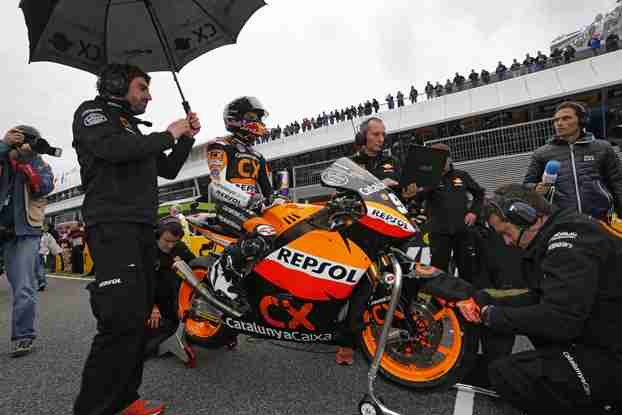 Rain at the Circuito de Jerez brought the Moto2 Spanish Grand Prix to a premature end, after 18 laps had been contested. Repsol rider Marc MÃ¡rquez was leading the race when the red flag was shown, but the win was given to Pol EspargarÃ³ as the race results were decided based on the last full lap completed by all riders. MÃ¡rquez continues to lead the overall standings, with one victory and one second place to his name. As the race began, conditions appeared to be perfect for 2011 World Championship runner-up, MÃ¡rc MÃ¡rquez. He was starting from pole position and the race had been declared dry. Despite his strong start, however, the Spaniard was overtaken by various riders on the opening laps and dropped down to fifth.

Following the seventh lap, the Repsol rider began to climb back up the order. Showing patience, he waited to make his move in what he expected to be a long race. Redding, Luthi and EspargarÃ³ exchanged the lead 12 laps from the scheduled conclusiÃ³n to the race. MÃ¡rquez went on the attack and, three laps later, moved into the lead. Pol EspargarÃ³ responded and took the position on lap 17, with the rain intensifying. MÃ¡rquez got back in front, but was just a few corners too late to make the cut when the race was abandonded. The last completed lap by all riders had EspargarÃ³ as the winner.

After his win in Qatar, the Repsol rider took a second consecutive podium and now has 45 points to his name, 4 more than rival EspargarÃ³.

“The race was very difficult, above all at the start and right at the end when the asphalt condition was very delicate. It was hard for me to find my pace at the beginning and it was two thirds in that I finally pushed for the lead, knowing that anything could happen. When the rain began to fall, my experiences in 125cc and from last year came to mind. I knew that it was more important to take 20 points than push and take 0, so second place is a good result. Bearing in mind the track conditions, we have to be very happy and start thinking about Estoril”.