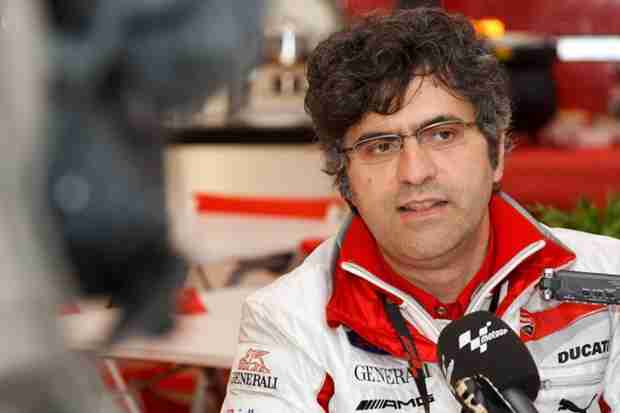 Speaking about Valentino Rossi’s seventh place at last weekend’s Grande PrÃ©mio de Portugal Circuito Estoril, he said: “I think the result yesterday is based mainly on the small steps taken between one practice session and the next, keeping the same basic bike set-up and just trying to solve the small problems that you have practice by practice. Of course the result is better than before, but it is not at the level we are expecting, so we know we have to close the gap.”

Both Ducati riders have made it clear that the Ducati engine is producing so much power, that it is in fact a deficit when trying to get the best handling out of the bike. Preziosi outlines Ducati’s plans to overcome this issue: “We are working on improving the drive-ability. One of these items is an engine that has more torque at low rpm and less power at high revs. Usually this kind of engine gives better driveability. For the engine we have now, we have a lot of torque even at low rpm, and in fact we are not opening the throttle body at low rpm, because the torque is more than the chassis is able to use. So for that reason there is a question mark that only our riders can answer – if it makes sense to add more torque and less top power, even with this kind of engine? So we are very interested to test this engine to get an answer to this question.”

He explains how the new engine characteristics should aid the riders out on-track: “We believe that the engine driveability will help when you are at full lean and you open the throttle. To have a smoother response could help in avoiding that, when you are on the edge, you start to spin up and the bike starts to understeer. But we are doing some other activities on the chassis side in order to reduce the under-steer.”

With the post-race Estoril test cancelled on safety grounds due to adverse track conditions, timing is crucial for the Italian team. “We think that we will end up at Laguna Seca (29th July) with a complete package. We have different items we think will be good, so we are optimistic about our three tests at Mugello in May, June and July. We will test this package and should be ready for Laguna. The plan is to test with Valentino in May, and Nicky in May, June and July. July is an after race test and May and June are private tests. The first test is after Le Mans. Unfortunately we cannot test it today. If the riders are happy with the changes, we are ready to supply the third engine for Silverstone 17th June) with that spec.”

Not all the upgrades Preziosi and his team envisage will be ready for the first test however. “At the first Mugello test we will start to test something, but there are other things that will only arrive in June and July. At the Mugello race (15th July) we will not have the total package because the engine driveability package is related to the use of the engine. The idea is to seal engine number three in Silverstone and engine number four in Laguna, according to the mileage, so will not have the total package at Mugello. This is unfortunate, because Valentino likes the race a lot and it is our home track.”

MotoGP factory teams are restricted to using only six engines per season – hence Preziosi’s careful planing of the allocation. And despite a slow start to the season, Preziosi is adamant he places his full trust and confidence in Rossi and his Crew Chief Jeremy Burgess: “For sure this challenge is being done because we want to build a bike for Valentino, because we believe that a bike Valentino likes, is a good bike for all the riders. We are following the direction of what he suggests. Of course we are trying to do that at the best of our capability, which is not enough right now to be faster than a Honda. But for sure we will try in the direction that Valentino shows us. We give Jeremy 100 per cent freedom to define with Valentino what the best set-up is. So as Ducati, our duty is just to supply material, and we believe that the crew chief is imperative in the box. The way of working is to put the right person in the right position and allow that person to do what he thinks is best. We can suggest what our ideas are, but the final decision, day by day, practice by practice, is made by Jeremy speaking with Valentino.”