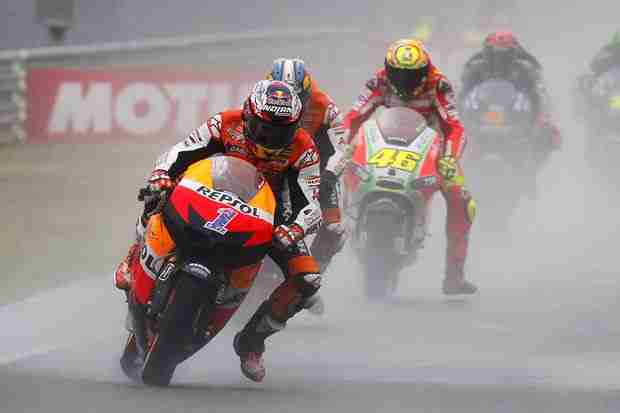 Sun and high temperatures are expected for the latest round of the MotoGP World Championship, as the series leaves the rain behind and heads to Catalonia. Stoner and Pedrosa in MotoGP, MÃ¡rquez in Moto2, plus ViÃ±ales, Oliveira, Rins and third-time wild card Ãlex MÃ¡rquez in Moto3, will be the Repsol riders in action in front of the Spanish fans.

In the premier class, the Repsol Honda Team riders have previous experience of winning a Catalan GP. Casey Stoner –edging ever closer to Valentino Rossi’s record of 23 consecutive podiums– was the dominant winner of last year’s race. Dani Pedrosa has won at the track in three classes and is aiming for another win in order to make up ground in the title chase.

Moto2 is the most even class at the moment, and Marc MÃ¡rquez arrives at his home round eager to turn around his bad result at Le Mans. The Repsol rider won at the venue of this weekend’s race in 2010, on the way to the 125cc title. This season he has a second shot at a Moto2 victory, looking to return to the top of the overall standings.

After the tricky race in the wet at Le Mans, the Moto3 riders are hoping for better conditions this weekend. Second in the standings, Maverick ViÃ±ales is gunning for his second win of 2012 at a track where he placed on the rostrum last year. Portuguese rider Miguel Oliveira will also try to earn a strong result from the excellent form that he has shown so far this season.

Teammate Ãlex Rins is out to continue on from his outstanding maiden podium at the French GP with another positive result this weekend, whilst Ãlex MÃ¡rquez makes a third appearance as a Moto3 wildcard in a rich run of form, having taken a podium and the series lead in the CEV Spanish Championship this past Sunday.

“Catalunya is, obviously, one of my favourite races because all my family, friends and fans are there supporting me and it’s a very special date on the calendar. I’m really looking forward to getting there after missing the race last year. I want to feel the atmosphere again and I’m very excited and motivated to do well and fight for victory. Catalunya is a hard track because normally it is hot, but it would be good to have good weather for a change!

The test on Monday will be also very important for the team. Catalunya is a very good track to test the new tyres because it is one of the circuits where you stay on the edge of the tyre longer and a long time turning right, you need good feeling in the front. It will be important to have a good test to arrive at Silverstone with the best information possible”.

“Catalunya is one of my favourite races and it was the first major grand prix circuit I tested on. Ever since that moment I fell in love with the track, the big fast sweeping corners there’s a lot of control in the middle of the turn trying to get grip for the exit. We know the Honda works well here and we had a good race here last year, I just hope this weekend will be dry, that would be great!

After the race we have a test on Monday. I really hope the weather is good for us as it’s an important test going forward for the remainder of the season”.

“This week is very special for me, as both I and my brother –a Moto3 wild card– are riding at MontmelÃ³. It is a home GP and there is obviously plenty of desire to be ready to provide a good result. I crashed at Le Mans after a good weekend and the standings are now a lot tighter, almost making it a restart from zero.

Our aim is to be focused over the three days and keep the race in mind right from the opening practice laps. MontmelÃ³ is a track that I like a lot, where I got on the podium last year and where I won the 125cc race the previous year. I am ready to work hard from the off, with my team and the fans right behind me”.

“Logically, every time that we ride in Spain it is a special occasion, because it is where we feel most at home. MontmelÃ³ is even more special for me, because it is the closest track to where I live and is where I have the most friends and family members in attendance. We weren’t so lucky at Le Mans, but despite this I am excited about racing this weekend. I hope to have a good race and wash the bad taste from my mouth from Le Mans.

MontmelÃ³ is a track that I like and where we have been able to go fast before. I am very motivated, the bike is competitive and I will have plenty of home support, so we have to think positive and hope for a good result”.

“I am very confident heading to MontmelÃ³, as it is a familiar track for me. I want to put an end to the bad luck that we have had since the Spanish Grand Prix and will be approaching this round as if it were the first of the season; we’ll start from zero, but with the advantage of having previous experience from the races beforehand.

We are undoubtedly one of the frontrunners for every race, so I am quietly confident. I can’t wait to start the weekend and do an excellent job in order to give the team the reward that they deserve”.

“I am very happy with the result from Le Mans, but we have to keep on working in the same way in order to maintain our form. I want to thank Doctor Mir and his medical team, because they have helped me to make a speedy recovery. Now I just have to see how I go on the bike. MontmelÃ³ is a track that I like a lot, and I ride with the small advantage of knowing it inside out.

It is a special moment to be riding at home for the first time in the World Championship, so I am excited to get on track and enjoy myself. I hope to do as well as possible over the course of the weekend”.

“I can’t wait for this home race to come around. This is my third wild card appearance, after Jerez and Estoril, and I think that I am in good form after the results in the CEV. It is a shame about my crash last weekend, but I think that I have enough time to recover and get back to 100% for this round, ready to fight to finish in the points again.

The Circuit de Catalunya is a track I know well and I like it because it is well balanced in terms of technique and speed. We shall see how it goes”