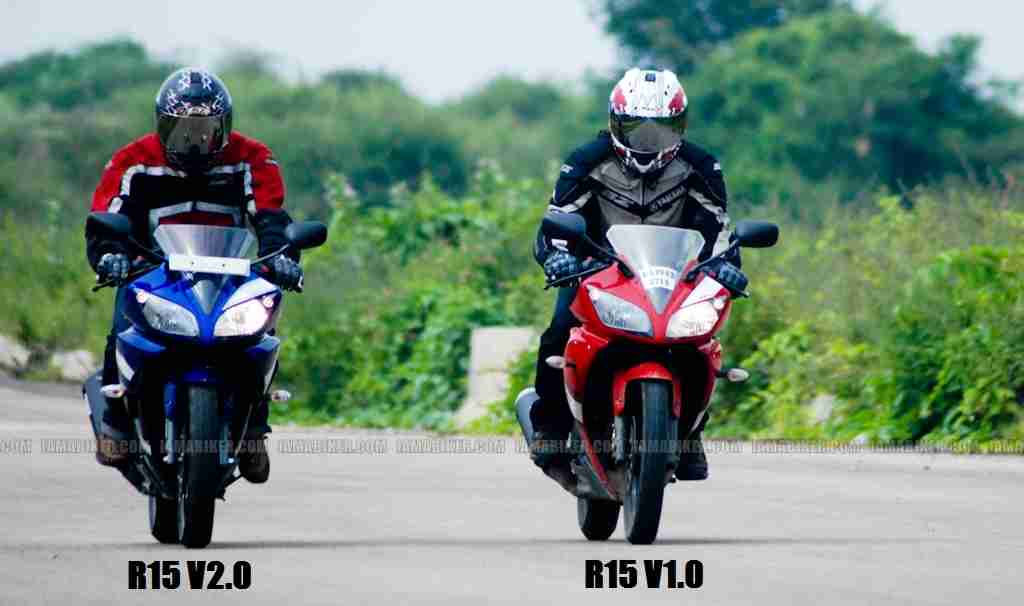 If they are coming straight at you there is little chance you’ll be able to tell apart the R15 V 1.0 from the newer R15 V 2.0. From the rear however, it is a totally different story. You can be forgiven for thinking they’re two different bikes entirely. The most obvious and the most eye-catching difference is the tail of the new R15, which resembles that of the R6. The new R15 now sports a split seat design, with the pillion’s seat considerably higher than the rider’s. Coupled with the rear fender assembly and the beefy tyre that customers desired for so long, the new R15 is that much closer to looking like a full-fledged supersports-bike.

The tail lights are now LEDs, which are bright and also energy efficient and is placed in a triangular housing. The rear number plate holder and mudguard is positioned below the tail-lights, attached via an aluminium bracket. Removing it when hitting the tracks is a simple process. 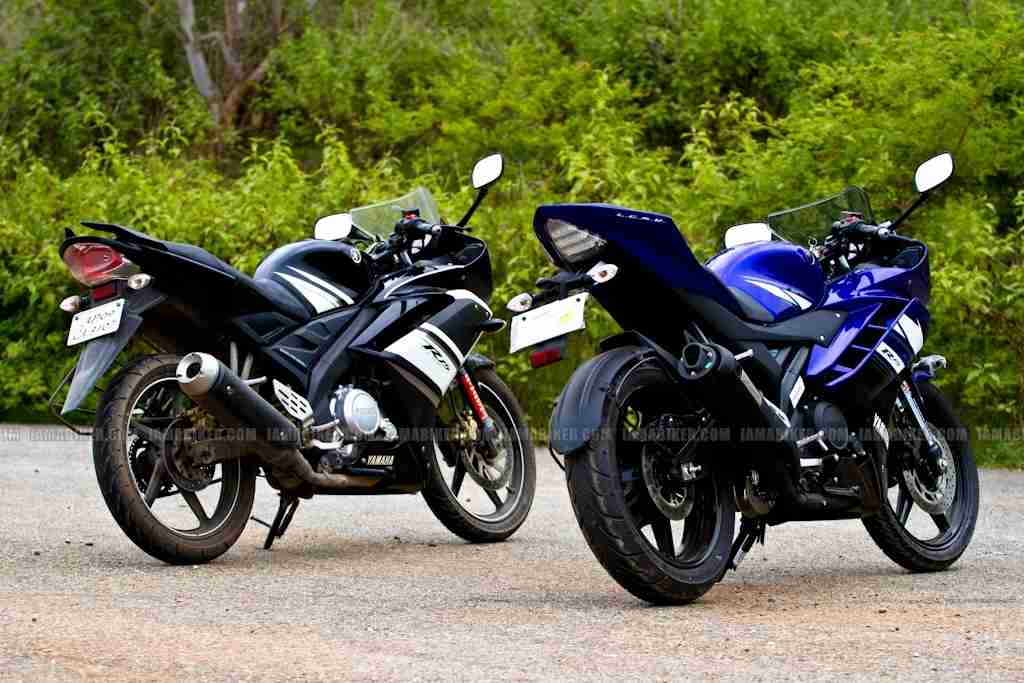 The most sought out change that people wanted for their R15’s were for fatter tyres. At the front, we now get a 90/80-17 MRF Zapper-FY1 instead of an 80/90-17. At the rear, we have an MRF Revz-S 130/70-R17. The R stands for Radial, which means the tyre uses radial ply-cords and steel belts in its construction. If you did not get the last bit, just take it to mean a fat tyre with stiffer tread and lighter weight. Both the tyres are made of soft compound and offer exceptional levels of grip. They are mounted on 17 inch alloys that have excess metal carved out to keep weight to a minimum. The rear now has a tyre-hugger with an integrated saree guard to comply with legal requirements. Yamaha have put some good work into integrating this legal requirement quite well.

When you get onto the V2, you can instantly notice the increase in the seat height, but your attention soon diverts to the seat surface itself, which feels very grippy beneath your bum. It prevents unintentional sliding on the seat, but without being too restrictive. So now you get lots of grip not only from the soft compound tyres, but also the seat! This is particularly helpful for the pillion as the grab-rails have been discarded and all you get to hold on to is a  half-inch wide strap at the front of the seat. 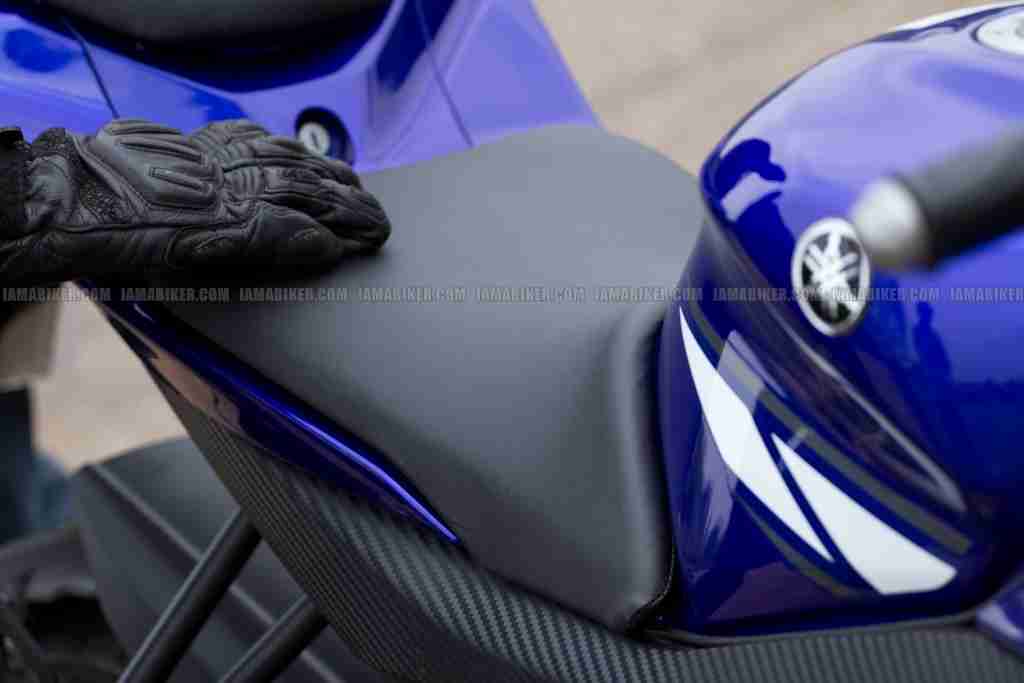 The handle and foot-peg positions seem unaltered, but due to the raised seat, the riding posture feels a bit more aggressive, especially when tucking in at high speeds.

Given the fat tyres and the low end torque of the previous-gen R15, we expected to see the torque take another steep dive, as on paper the peak power and torque figures remain unchanged. But we were pleasantly surprised. Despite the extra 5 kilos, the new R15 V2 pulls more strongly and easily at lower revs, which makes the bike more usable in stop and go traffic and touring by keeping gear changes to the minimum. This is achieved by changing the secondary gear reduction ratio from 3.000 to 3.133, a previous 14/42 front-rear sprocket ratio, to 15/47 so that you get more torque in every gear.

Apart from the revised gearing, the engine feels the same as before. The exhaust note however has more bass to it and sounds better. The silencer has been redesigned with a plastic heat shield that looks like carbon fibre and rises at a steeper angle to keep in line with the new tail. There is a name tag on the silencer to help anyone wondering what bike it is. 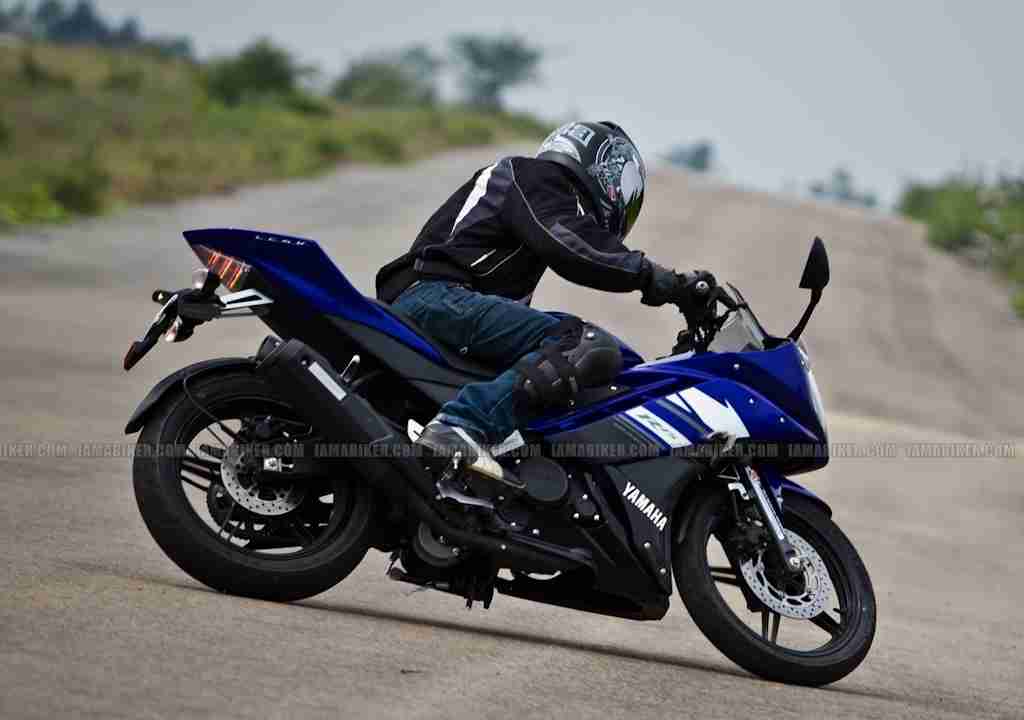 The new aluminium swing-arm that has trickled down from the R15’s bigger brothers increases the wheelbase by 55mm which imparts more high-speed and mid-corner stability to the bike. It feels less twitchy when making small corrections or going over bumps. Flicking it from one direction to another however requires little more effort compared to the older R15. Those who are new to the bike might prefer the older version’s manoeuvrability while veterans might opt for the increased stability to carry more speed out of a corner. Overall, the bike feels more planted and less eager to change directions due to the increased wheelbase and extended trail, but once you get it leaned over, it is easier to stay that way through the corner.

The Nissin brake calipers are unchanged except for their colour which is now plain black, while the disc rotors have been upgraded, the front is the same size as before but the rear is now 220mm in diameter. Braking remains as good as it was with the previous generation. 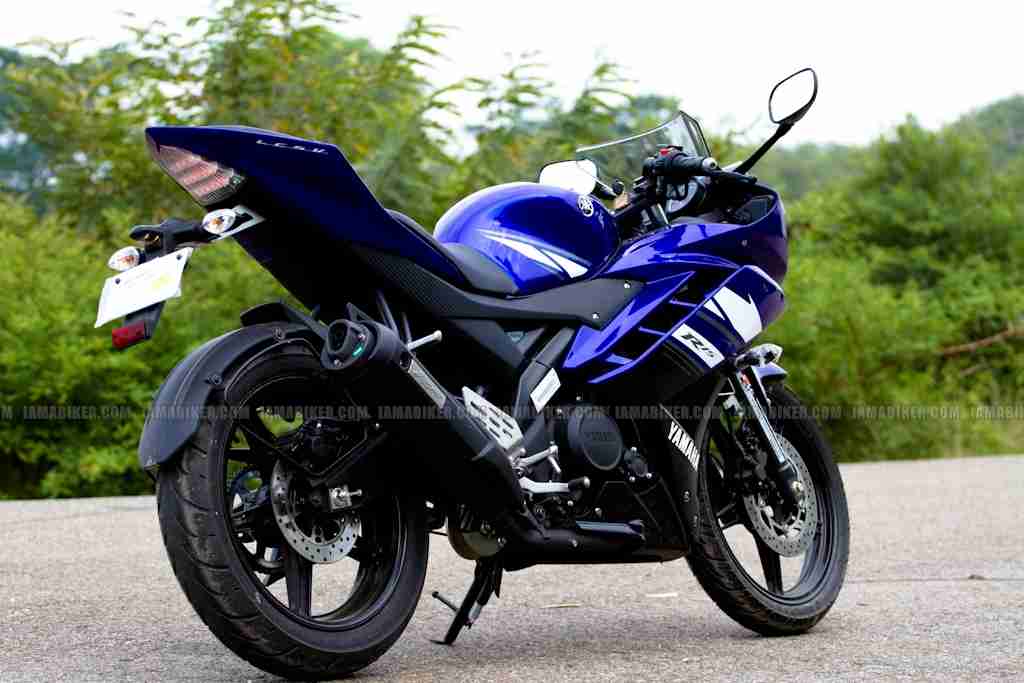 The redesigned front fairing now protrudes a bit further below the headlights reducing the apparent gap between the mud-guard and the headlight assembly, lending the bike a sporty crouching-and-ready-to-pounce look. And with the pointy tail, the image of a wasp that’s ready to sting comes to mind.

On the other hand, features that come to be expected of a bike that screams of racing heritage like a lap timer and/or a top speed recorder are sorely missed. At the very least, a clock could have been provided! 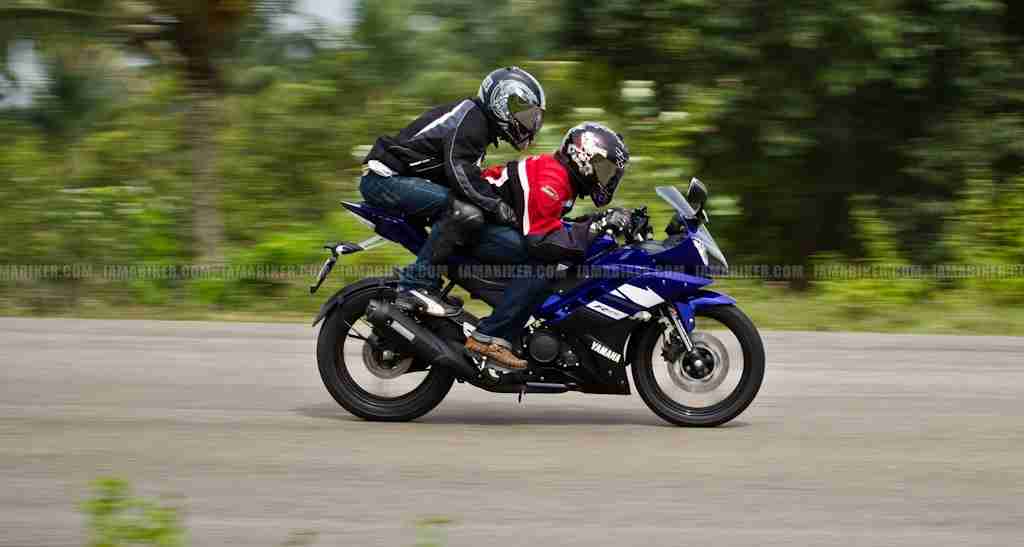 With the engine tuned for more low to mid-range torque, the bike becomes more rideable at low speeds, in traffic, even with a pillion. Pulling off the line when the light turns green is a breeze as you don’t need to rev the engine high before the power kicks in. The riding stance though is still more inclined towards superior high speed control rather than comfort so daily commuters will be as bothered as they were with the previous version.

The pillion’s story is in a different league altogether. The first problem would be to get on to the high slung seat. A combination of height and a degree of flexibility is essential to get up there without much ado. Shorter people will find the feat more difficult without using the foot-peg as a ladder. Then comes the issue of the small seat and missing grab-rails: all you get is a strap between your legs to hold on to. Since the seat is higher than the rider’s by a good 4-5 inches, it’s easier to grab the tank for support rather than hang onto the rider. Either way, the pillion will have to be leaning forwards on the rider for more stability, especially when braking. Good news if you’ve got your guy/girl on the back, not so good if it’s someone you don’t want to get too intimate with. Passers-by will notice the rider hunched over the bike and the pillion hunched over the rider. It will be a bit tiring for the pillion to sit through long rides. 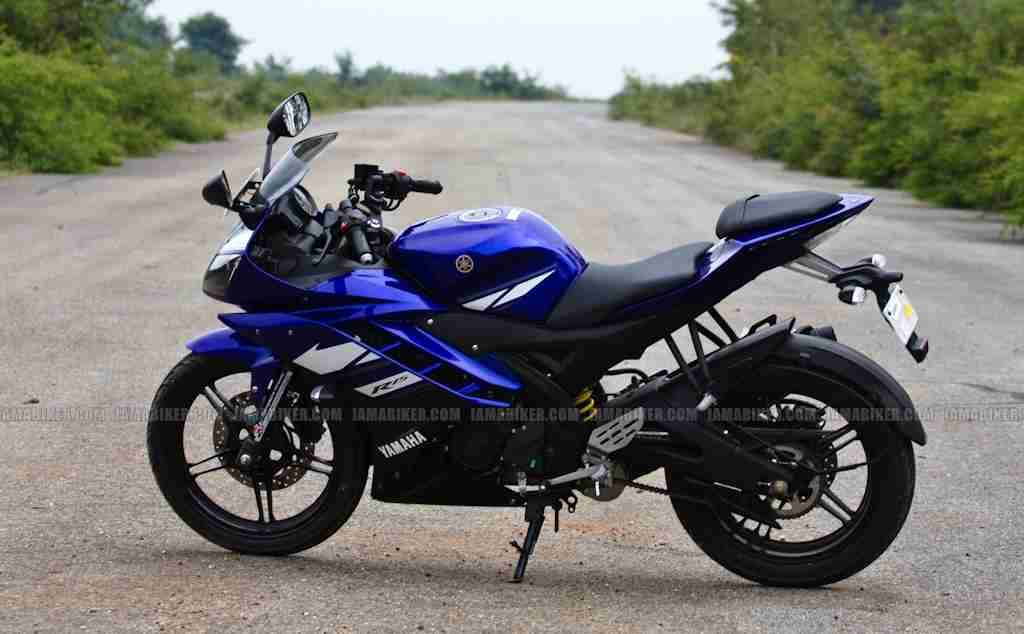 Thanks to the wide power-band, the R15 V2 is better at touring than the original, by minimizing gear shifts and facilitating relaxed highway cruising with its 2 overdrives. The need to downshift as often as in the V1 is also reduced. The longer wheelbase and wider tyres add to the straight line stability of the bike. The downsides are the sporty riding position, un-encouraging pillion seat and the inability to mount existing saddlebags without altering them first. The new horn is louder and sounds better since there are two of them, each with a slightly different tone. They do a good job of making sure other road users notice you.

The twin throttle cable enables one to keep riding even if one of the cables snaps in the middle of nowhere. The tyres have bigger, deeper and a greater number of treads to provide optimum traction over a range of terrains. There is however, no under-seat space for storing small articles like toolkit, puncture repair kit, vehicle documents, etc. 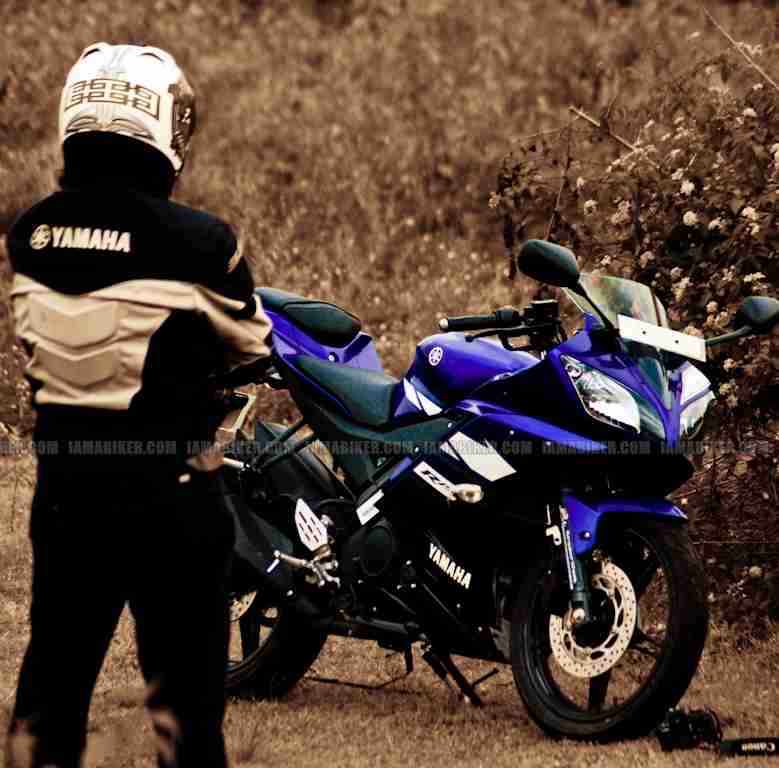 The R15 was very good as a track-bred machine, but there were some shortcomings for everyday use, most notably the meagre low-end torque. One would have to rev the engine a lot more than rival bikes to get it up to speed from a stand-still. While the bike looked awesome with its full fairing, the tyre size was an eyesore. The R15 Version 2.0 overcomes these issues with altered gear ratios so that there is torque available right from the lower revs. The new body work, the pointy tail, the meaty swing arm, the beefy tyres and a deeper exhaust note up the ante to a new level. This simply has to be the best looking 150cc out there.

With an ex-showroom price of 1,07,000INR in Delhi, 8000INR more than the old R15, we think the V2 is definitely worth buying, the technology and detail that has gone into the R15’s in general still remain unmatched and add to that the new looks its definitely a winner. However with the on-road price inching dangerously close to the CBR250R’s which offers a more complete package for a fractional increase in cost. For an extra 30k, you get more power, more torque, more comfort (for the pillion and the rider), and a bigger fuel-tank, which practically speaking is more usable than the sheer handling of the R15. The new R15 V2.0 has never been just another 150CC, its always been more of a lifestyle choice, and now it comes with a more dedicated purpose than the older R15. Definitely worth the money you pay, but the competition is not far.