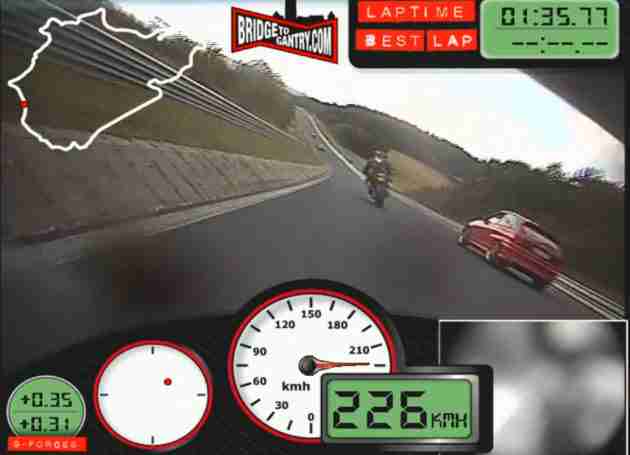 We’ve seen manufacturers after manufacturers take on Germany’s famed NÃ¼rburgring as a benchmark arena to test their cars,  drivers attempt to tackle the 13 miles and 154 corners as quickly as possible. Cracking the 10-minute mark means you’re not entirely ham fisted. Want to go even faster? Things start to get exponentially more difficult, but the world’s fastest production sports cars run in the low- to mid-seven-minute range.

How do the two-wheeled folk stack up?

Not as well it seems, thanks in part to the bumpy surface and varied paving materials. That doesn’t mean motorcyclists can’t lay down impressive lap times, and one anonymous person in particular decided to see just how fast they could go.

Despite the traffic on the road, this skilled rider ripped off a rather impressive lap time. Starting the clock at the bridge, the clock was stopped at the gantry just seven minutes and 26 seconds later.