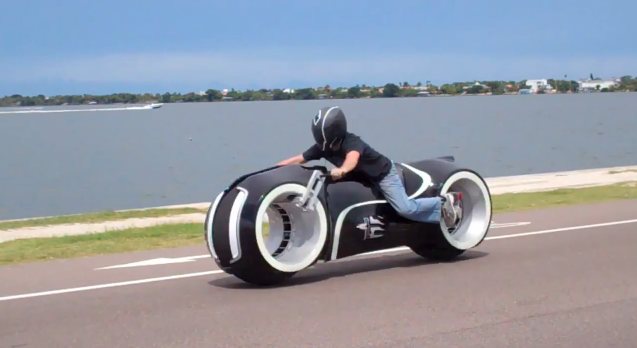 The Tron motorcycle a sci-fi concept that had all our imaginations tingling with all the possibilities. The company ‘Parker Brothers Choppers’ has just released a video of a fully-electric version of the neon-packing two-wheeler in action. The electric motor is quite but once you are this sci-fi motorcycle you can start collecting dropped jaws off the street as you ride by. The ‘Lightcycle’ based on the motorcycle  shown in 2010’s Tron: Legacy and in its latest real-world form it has undergone extensive body reworking as well as getting a 96 volt electric motor and lithium ion battery pack. Parker Brothers quotes an (impressive if true) top speed of in excess of 100 mph for and a range of 100 miles on a single charge with 35 minute recharge times.

No scrapping pegs or fancy overtake maneuvers on this bike but still the style proposition it provides is definitely out of this world atleast till you reach the first speed-breaker.

Here’s the Parker Brothers Choppers video of the All-Electric Lightcycle in action: