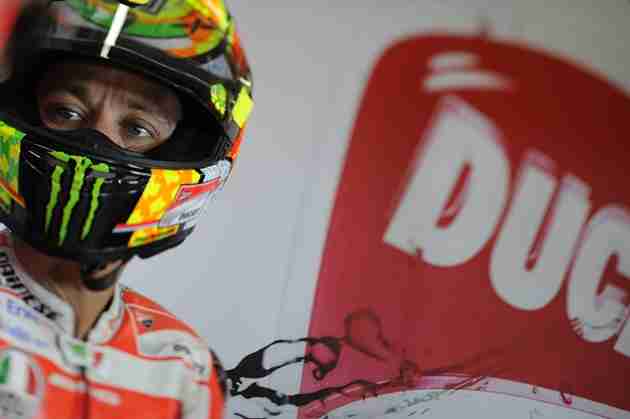 Valentino Rossi’s struggle to turn around his Ducati fortunes hit a new low on Saturday at Sachsenring, when the MotoGP superstar qualified just 16th out of the 17 riders. Rossi’s best lap time, of 1min 23.320sec came on only his sixth of 30 laps and was 1.639sec behind pole sitter Casey Stoner.

The Italian – without crew chief Jerry Burgess for the second event in a row – also lapped 0.925sec slower than he had managed on his return from a broken leg at last year’s event, when he qualified fifth on a Factory Yamaha.

Rossi, the only Ducati rider using the latest GP11.1 motorcycle – which features an 800cc engine attached to next year’s (1000cc) chassis and a new seamless transmission gearbox – was almost one-second behind the ‘standard’ Desmosedici of his team-mate Nicky Hayden (eighth).

As such, Rossi has now revealed that he could ditch the GP11.1 and go back to the previous version.

“We are very upset, because we are struggling very much this weekend. I am very slow and close to last,” Rossi told the official MotoGP website.

“For three races now we’ve used the new [GP11.1] bike to try to improve on the performance of the old one.

“I tried this bike with the 1000 engine and it was not so bad, but with the 800 engine the bike became very difficult to ride and I cannot load the front of the bike.

“So our performance at the last three races has been very, very bad. Especially in practice. And here it has been worse.

“So now we think maybe to come back to the normal, standard, bike. I don’t know when. Maybe after Brno [mid-August]. We will decide after tomorrow.

“We’ve tried changing more or less everything on the bike [here] and, at the end, the lap time and our performance does not improve.

“So I don’t know what we can do for tomorrow’s race, but we won’t give up and will keep trying to improve.”

“The other Ducatis are preforming better than the new bike being used by Rossi – Vitto admitted – but even they aren’t doing extremely well, because extremely well would be on the front row.  The truth is that we can’t find an acceptable setup, and instead of going forward we are going backwards.  Now me must decide if we should continue like this, or return to a previous solution. Obviously the GP11.1 performs differently with the 800cc engine.  We have probably taken a big step forward with the rear, which is actually making things even worse for the front.  Strangely enough, when the rear is worse the front actually feels better!  The GP12 was first conceived in early 2010, and it was ready for testing in March.  Valentino liked it with the 1000cc engine, but the 800cc version is giving us big problems.”