Nicky Hayden has confirmed that he will attend the 2011 Isle of Man TT Races. His scheduled visit, is on Wednesday 8th June, and will include an Arai Parade lap with five-time 2010 TT champion Ian Hutchinson and five-time Australian 500cc World Champion Mick Doohan. He will also start and present the trophy for the Monster Energy Supersport Race 2, before he begins his preparation for the British MotoGP round at Silverstone on Sunday 12th June.

Commenting on his visit to the Isle of Man he said:

“I’m really looking forward to going to the Isle of Man. I’ve been to pretty much every kind of motorcycle race you can imagine — the Daytona 200, the Jerez MotoGP, the Anaheim Supercross, the Namur World Motocross — but I’ve never been to the Isle of Man or any other real street race. The TT is just one of those events that every race fan wants to see eventually.”

“I’m a huge fan of motorcycle racing of any kind, and I feel like this one is definitely something I’m missing. People have always told me, ‘You need to go to the TT,’ and now I’m finally going to get my chance. I’m really looking forward to meeting the riders, and I want to see what they do and how they do it. I’m not sure what to expect, but I do know it takes a brave rider, which is something I respect.”

‘We’re really excited that Nicky is visiting the Isle of Man this year. This is our fourth year as the Official TT Safety Partner and every year we have worked hard to deliver special people to this special place. Dainese’s founder Mr Lino Dainese first saw a race in 2008 with Carl Fogarty, Marco Lucchinelli and Giacomo Agostini. In 2009 Valentino Rossi attended and last year Angel Nieto and Jorge Lorenzo enjoyed their experience and now Nicky will see the home of road racing.” 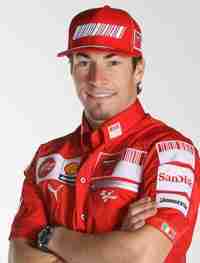