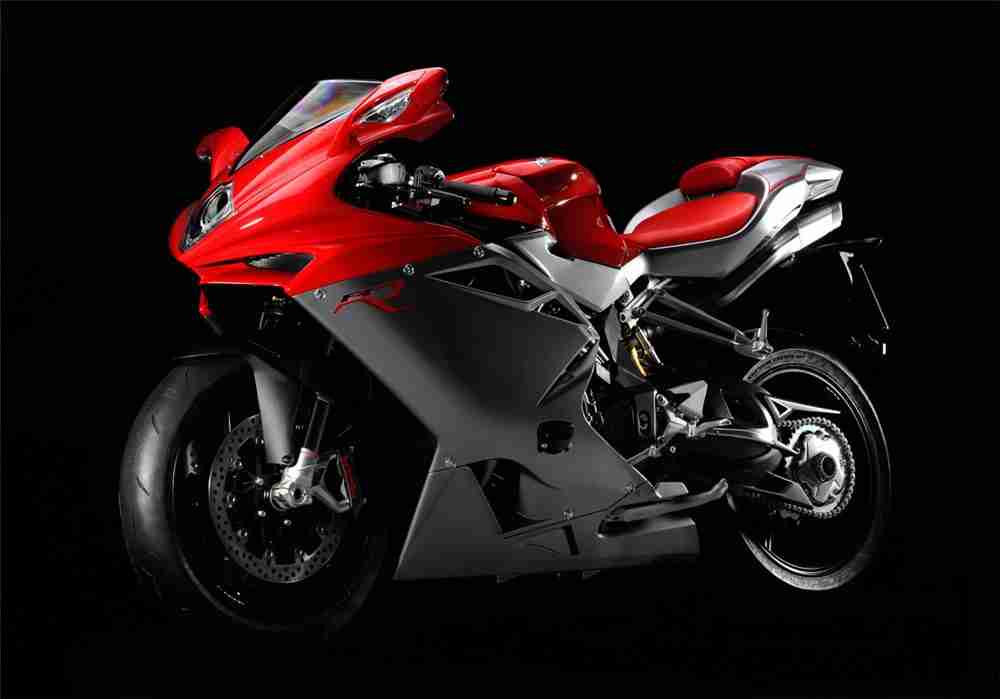 MV AGUSTA have revealed the latest F4R Corsa Costa model. The new F4R runs on the Corsa Costa engine found on the premium RR model but at a cheaper price. The key feature of the F4 R is, in fact, the new “Corsa Corta” engine capable of extraordinary performance is the same as the one, on top MV Augusta Superbikes.

According to the press release the thermodynamics have been completely redesigned, starting from the new low inertia crankshaft which makes it possible to use a super over-square bore and stroke ratio. The MV F4 R is capable of reaching rpm worthy of a pure racing motorcycle. The engine capacity of 998cc has been obtained by using a bore of 79 mm and a stroke of only 50.9 mm. In this way it is possible to achieve an extremely high 13.700 rpm rev limit while at the same time lowering the linear velocity of the piston from 24.9 m/s to 23 m/s improving reliability.

In order to produce a power of 195.2 hp (against the 201 hp of the super powerful RR version) at 13.000 rpm, every component has been engineered with a lot of precision. The cylinder head uses completely new ports and employs larger valves both on the inlet and exhaust. For the first time on a mass production motorcycle, all the valves are made of titanium, allowing the weight of these to be reduced regardless of the increase in diameter (from 28.6 to 31.8 mm for exhaust and from 24.6 to 26 mm for the exhaust). The engine “breathes” in a more efficient way thanks to the use of a new 4-2-1-4 primary section of the exhaust system. In addition to assuring optimized engine efficiency, this new exhaust system offers an absolutely unique sound that is even more captivating then in previous versions. The fuel system employs 4 throttle bodies with a 49mm diameter and double fuel injectors per cylinder coupled with the unique MV Agusta TSS (Torque Shift System) variable intake runners.

The new engine of the MV Agusta F4 R was designed with the scope of reducing the internal friction to a minimum: the transmission’s new primary gear ratio allowed a drastic reduction in rpm of both generator and water pump, thereby limiting the absorbed power. This extraordinary engine utilizes the unique features that have become trademarks to MV Agusta including a removable 6-speed gearbox and a slipper clutch which assures precise control even during the most violent braking manoeuvres. The electronic management system has been continuously evolved, the traction control employs a new algorithm and maintains the two rider selectable engine maps, all of which are now comfortably adjustable by means of the new control situated on the left handlebar.

The new MV Agusta F4 R remains, naturally, faithful to the structural tradition of mixing a steel tubular trellis to cast aluminium side-plates. The steering head angle is set at 23.5°, perfect for providing control, manoeuvrability, and stability. Also confirmed is the exceptional rear single-sided swingarm, a real engineering jewel that weighs only 5 kg, a record for this type of element.

The MV F4 R retains its notoriety for excellence in the area of suspension. The Marzocchi upside down forks, with 50 mm stanchions, is derived directly from the units used in competition, they areadjustable in spring preload as well as the hydraulic extension and compression. The forged ultra-light front axle carrier is also especially made for the F4 R and uses a rapid release system for the wheel, reminiscent of the first F4, the legendary Serie Oro that adopted this same technical solution. The rear Sachs shock absorber is equipped with a nitrogen reservoir (separated and integrated within the body) and is adjustable in extension, compression and spring preload. The shock linkage allows the ride height to be adjusted depending on the desired setup, rider preferences to further tune the bike to specific riding conditions and tracks.

The Brembo front brake system, with “monoblock” radial calipers is, without a doubt, the best system for motorcycles currently on the market, coupled to a master cylinder with integrated reservoir made specifically to demanding MV specifications. The 320 mm diameter floating double front discs use an ultra light flange which are 5 mm thick to reduce inertia forces and non suspended masses. The rear brake system is made exclusively for MV with a stainless steel 220 mm diameter disc and 4 piston calliper.

The new F4 R is available in 2 colours: red/grey and white/medium grey.