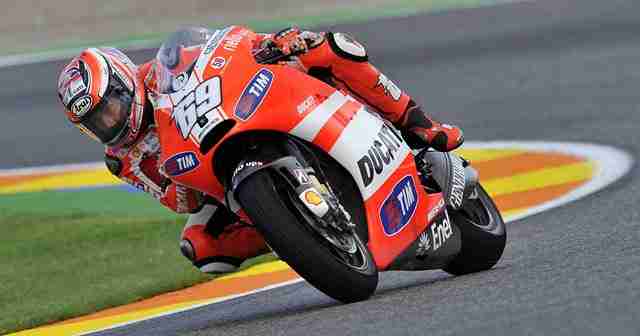 The Ricardo Tormo circuit saw the rain marring the first day of the fourth Spanish Grand Prix of the year. The Repsol Honda Team riders, Casey Stoner and Dani Pedrosa, were the ones to adapt themselves better to the weather conditions during the whole day and took the first and second positions at the end of the two first free practice sessions. His team mate, Andrea Dovizioso, set the ninth fastest time of the day. The first day of the Valencia GP started off well for the Ducati Team too, with Valentino Rossi and Nicky Hayden riding comfortably in the wet conditions that marked both free-practice sessions. The teammates posted the third- and fourth-best times of the day, respectively, their fastest laps coming in the morning session.

The first contact of the MotoGP riders with the Ricardo Tormo track was complicated. Under threatening dark clouds, the Valencian track offered areas with wet tarmac and others with dry surface. Some minutes had to go by before the riders adapted themselves to these difficult conditions and set times that, at the end of the day, would be the fastest. It was not until the last part of the session when Casey Stoner took the lead of the classification, improving the fastest time until setting a time of 1 minute, 45 seconds and 513 thousandths. The Australian saw in the last lap how his team mate, Dani Pedrosa, got closer and finished only 223 thousandths behind him. Andrea Dovizioso, meanwhile, set the ninth fastest time.

If the weather conditions were complicated in the morning, in the second free practice session they were even worse. It started to rain intermittently at the beginning of the session. The Repsol rider who felt more comfortable on the Ricardo Tormo wet track was Andrea Dovizioso. The third placed in the MotoGP Championship set the sixth fastest time of the session, followed by Valentino Rossi and his Repsol Honda Team mates, Casey Stoner and Dani Pedrosa, who set the eighth and ninth fastest time, respectively.

For tomorrow, the weather forecast indicates an improvement. Casey Stoner has a chance to match the record of pole positions in one year –twelve– set by Mick Doohan in 1997 in 500cc and equalled by Marc MÃ¡rquez in 125cc last year.

Here is what the riders had to say:

Dani Pedrosa : “This morning we had a very good run, but in the afternoon we had some issues on the bike with the rear shock and I only managed a few laps, spending a lot of time in the garage making changes. The track surface is quite old and very slippery, even when the track was drier it was still tough.

The feelings are not so bad and I think we need to be ready for mixed weather conditions, improving the set up step by step. Let’s wait and see if tomorrow we have some dry sessions to get out on slick tyres, this would be important to better understand the direction to take on the set up of the bike”.

Valentino Rossi: “Our bike works very well in the wet, so this morning I was able to push and to stay up there near the front. In the afternoon we had a few more problems because we made a mistake with the rear setting. I couldn’t manage to find grip under acceleration, or to ride the bike well like in the morning. I should add that we’re a bit on the limit regarding the asphalt conditions, because it’s very worn and has terrible grip. The rain and the cold make it worse, and it’s very difficult to ride. We’ll have to see how to proceed throughout the weekend, because if it stays wet, we could do pretty well. If it improves, we’ll have to see how we are in the dry.”

Casey Stoner: “It hasn’t been a great day to be honest, we’ve never had a great feeling here in the wet. I love riding this circuit in the dry, but there seems to be some sort of oil or grease on the circuit, I’m not sure if it’s due to a lot of car rubber down but it makes things hard for sure.

It’s been pretty useless in terms of finding a good set up, both sessions began with a little water and then drying out towards the end, when it’s like this you’re chasing the set up all day so we didn’t do too much work on the bike. We tried a few small things to make it better in the wet, but then as it dried up we saw everything we had done was a waste of time. We’ll wait and see what tomorrow brings and if it does rain again I hope it at least rains consistently so we can get a full wet session in”.

Nicky Hayden: “This was actually the first time I’ve ever ridden the GP11.1 in the wet, and I was really happy with how it felt. The track was extremely slippery. We came from Malaysia and Australia, where the surface would dry in no time, but here, even when it would stop raining, it just wouldn’t dry. The grip was really low, especially on corner entry, but we made a few steps through the day that seemed to help. I’m not going to lie; it would’ve been nice to end up in P1, even though it’s just Friday afternoon, but we spent a lot of time at the top and put up quite a few red helmets (the monitor’s indication for a best time in a sector or lap). We’ll see what the weather does tomorrow, but regardless, we got some good information.”

Andrea Dovizioso: “Today the conditions of the track were really demanding as there was no grip. We did good work with the team and we were careful not to make mistakes as we didn’t want to take additional risks with these difficult conditions. All in all, I’m quite satisfied as I was able to ride quiet fast without pushing too much but of course we need to keep on working. I hope that tomorrow the weather and the track situation will improve”.