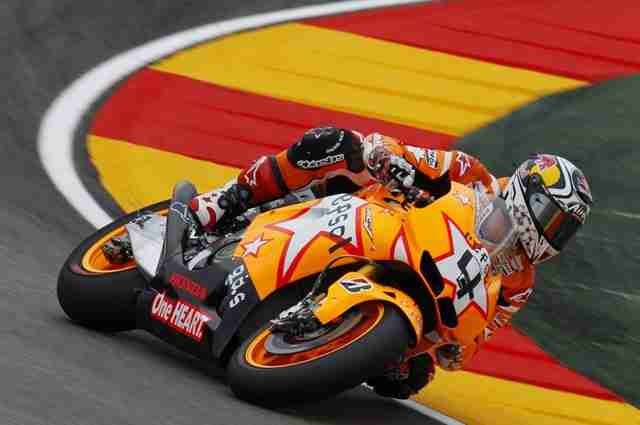 Repsol Honda’s Casey Stoner as expected cruised to another MotoGP win at Motorland Aragon this afternoon with team-mate Dani Pedrosa six seconds behind and reigning champion Jorge Lorenzo taking the final podium spot. This is Stoners 9th pole of the season.

Stoner took the lead from Ben Spies at the end of lap one after passing Pedrosa for second. Rossi began this afternoon’s race from the pit lane, 10 seconds after the others, after exceeding the six engines (per rider) limit for the 2011 season. The only small hiccup for Casey came with 13 minutes remaining in the session when he ran long and had to go down to avoid hitting the wall in turn 7, but the Honda rider was unhurt and quickly made his way back to the pits, where he then proceeded to improve his lap times on his backup bike.

Rossi went past the former World Supersport Champion and tried to gap the Monster Yamaha man, bit Crutchlow was having none of it and shadowed The Doctor until his tyres stared to go off. Crutchlow then rode round the outside of Rossi on the exit of the last turn to take back ninth with five to go and managed to stay ahead.

The race saw several incidents, starting at the first corner when Karel Abraham had a heavy crash on his Cardion AB Ducati, sending Randy de Puniet’s Pramac Ducati off course in avoidance. Works Honda man Andrea Dovizioso then had a solo fall a few corners later.

Here are the timings: 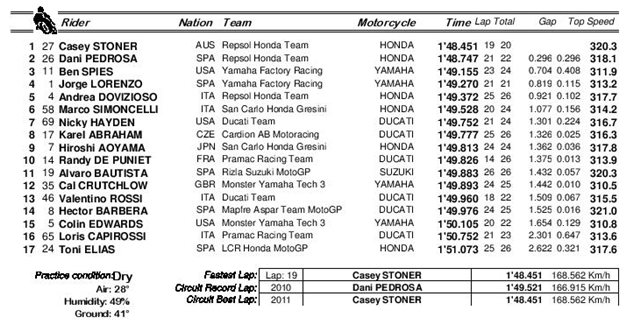