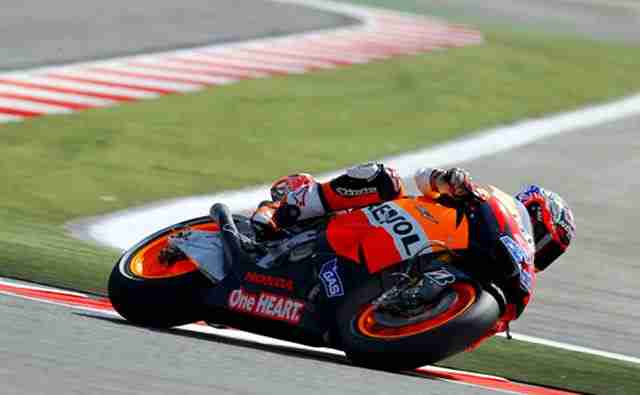 As he did seven days ago at the Indianapolis Circuit, Casey Stoner broke the Misano Circuit record, held by himself since 2008. The Repsol rider stopped the clock in 1 minute, 33 seconds and 138 thousandths, 120 ahead of Jorge Lorenzo and 180 faster than Dani Pedrosa, who will also start from the first row. Andrea Dovizioso will begin from the second row after achieving the sixth fastest time in the qualifying.

Stoner had already sent a warning during the third free practice where in only 4 laps he rode almost 4 tenths faster than yesterday. The Australian set a time of 1 minute, 33 seconds and 567 thousandths, a register no other rider was able to beat. Pedrosa was who got closer –99 thousandths away–, and Andrea Dovizioso repeated yesterday’s sixth place.

In the 60 minutes of the qualifying session, Lorenzo, Stoner y Pedrosa quickly took the initiative again, but the Australian of the Repsol Honda Team repeated his performance of seven days ago in the United States, doing a record lap and setting an astonishing time of 1’33.138, two tenths faster than his own record from 2008.