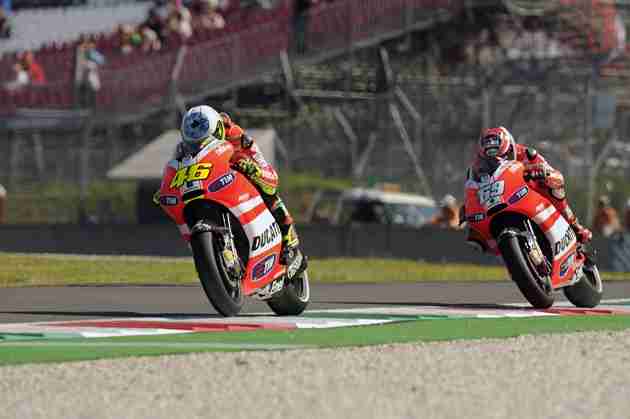 The factory Ducati team has decided to roll into Laguna Seca with two versions of the bike, the GP 11 and GP11.1, for both their riders. Buoyed by the improvement shown by Rossi in the German GP race, the factory outfit is doing its best to get the bike up to speed with the leaders or at the very least, somewhere close to them.

Nicky Hayden and Valentino Rossi will therefore have a total of eight bikes and the necessary spares to repair them during the course of the weekend.

Laguna Seca is Nicky’s home race and this ‘spoilt for choice’ scenario will undoubtedly put him in a fix as to which bike to choose for the weekend. He had finished the German GP in 8th place on the GP11, one ahead of Rossi riding the new prototype. To top that, there is only enough time to develop one bike for the race weekend. So Hayden would have to confirm his choice on Friday after FP1/FP2 and spend the rest of the weekend improving it for the race.

Either way, the GP11.1 will be far from competitive this year even with both riders giving feedback to the technicians. On the bright side, this could prove to be valuable testing for next year’s GP12 bike that will house the 1000cc engine.