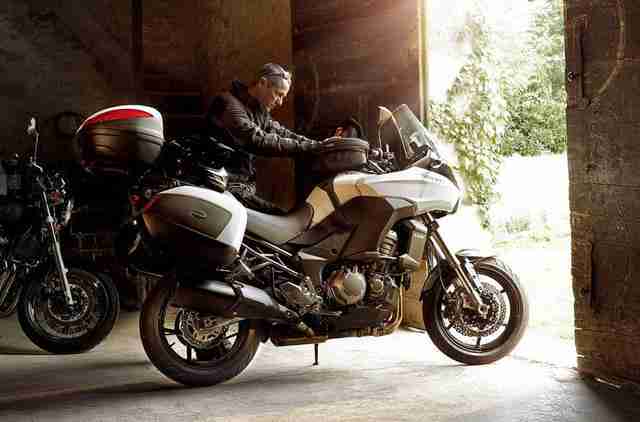 The Versys never was the best at weight or actual off-road strength, but what it brings to the table is the sheer amount of technology that can make all the difference. Power figures of the Versys 1000 stands at 116 hp and 102 Nm of torque might look small but Kawasaki says that a large part of the power is available at low revs, but what makes the new Versys 1000 special is that you can choose the amount of power that the engine produces at anytime. In addition the Versys 1000 is equipped with a new version of Kawasaki traction control that can operate in three different modes. This new KTRC in principle is a combination of the classical KTRC-S system on the ZX-14R and S-KTRC system on the ZX-10R. The new Versys traction control is standard equipment along with ABS system.

The suspension on the Versys 1000 get revised to adjustable front forks with a diameter of 43 mm, and a partially adjustable rear shock. Everything else on the big Versys is more or less similar to the current model, another addition is a indicator for economical riding which notifies the rider when his driving leads to fuel savings or fuel loss.

The new Versys 1000 will have to deal with the Honda Crosstourer, Suzuki V-Strom, Multistrada 1200 Ducati and the Yamaha Super TÃ©nÃ©rÃ© as competition. Kawasaki have not mentioned anything yet about the pricing, but surely, with quite some serious competition out there, Kawasaki will have to price it just right.