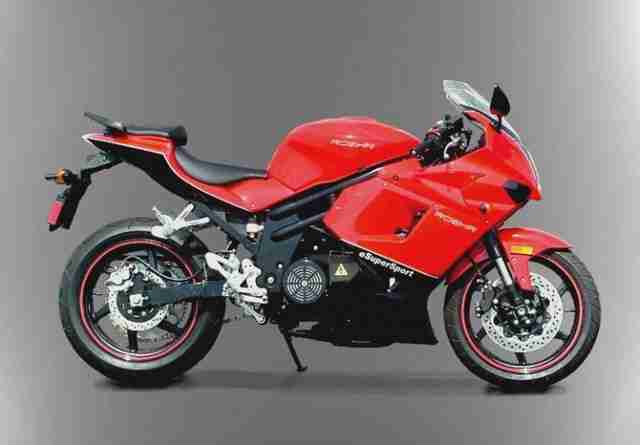 ROEHR Motorcycles has announced an update to last year’s eSuperSport model. The new entry-level performance superbike’s design is now based on the award-winning Hyosung GT650R. The Illinois-based firm has given it a power boost, and now it has a top speed of over 100 mph and its onboard battery is said to be good for 75 miles before needing some charging attention.

The new 2011 eSuperSport has been built around a twin oval tube steel beam frame and its single speed direct drive AC induction motor offers 67hp (50Kw) peak power and 80 pounds per foot (11.06kg/m) torque, with a top speed in excess of 100 mph (160+ kph). The Lithium Iron Phosphate LiFePO4 high discharge cylindrical cell battery solution has a 7.7 Kwh capacity that should be good for 75 miles (120 km) before needing to be topped up using its 1500 watt onboard charger, which offers a recharge time of seven hours. An eROEHR Battery Management system controls the charging functions, low voltage intervention and shunt cell balancing.

The eSuperSport is said to deliver the kind of handling and braking performance demanded by today’s sporting motorcyclists – benefiting from inverted suspension at the front with adjustable rebound and compression dampening and single shock rear suspension with adjustable rising rate linkage. There’s dual disc brakes at the front with four piston calipers, and the six spoke aluminum wheels front and rear respectively sport 120/60ZR17 and 160/60ZR17 Bridgestone tires. The 470 pound (213 kg) REOHR eSuperSport is available now for a suggested retail of US$17,995. 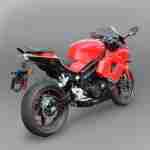 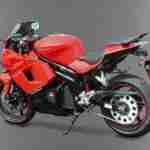 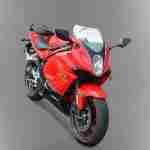