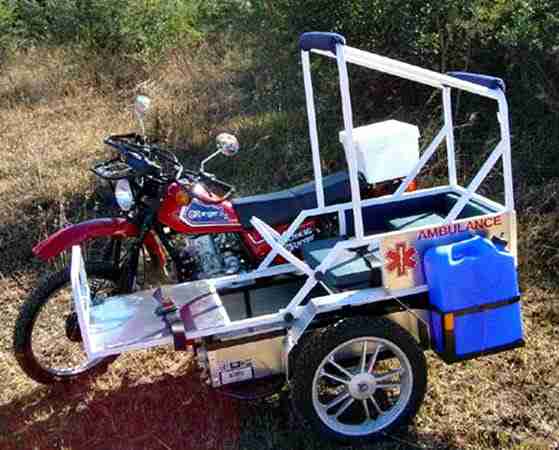 In a continent where many countries are ravaging under widespread disease and intermittent civil wars, comes a very unusual saviour on two wheels. Bike ‘Ambulances’ have been introduced in several countries in Africa so as to provide basic health-care to people in remote areas.

These bikes are designed in the United Kingdom and are then assembled in South Africa by a company called e-ranger, who specialize in building custom made relief vehicles. UNICEF and e-ranger have joined hands and are hoping to deliver at least a 1,000 such bikes across the globe, predominantly in Africa. These machines were introduced in Sudan in 2009 as part of a pilot project by UNICEF. The success of these purpose built bikes in decreasing maternal mortality rates in Sudan has encouraged further installation of such ambulances all across Africa.

The bike ambulances are based on Chinese four stroke JH125 and JH200s. The bikes are fitted with a sidecar specifically made keeping in mind the needs and the terrain in which these bikes will ply. Bad roads or even the non-existence of roads are not a hurdle for these rugged lightweight bikes as they maneuver to areas where otherwise help cannot reach. The sidecar is loaded with medical equipment and even has the capacity to carry one patient. The sidecars even have roof bars and all-weather covers to protect the passengers. 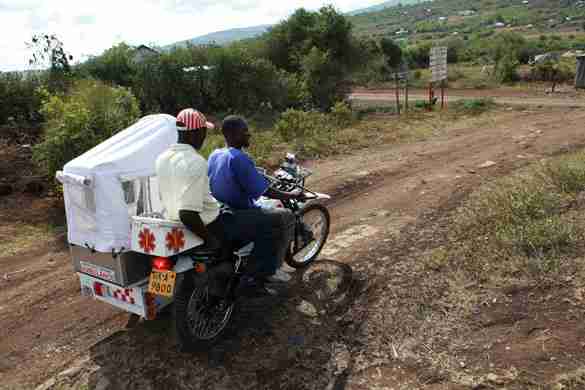 Bike ambulances are a boon in terms of cost-effectiveness and reach. The bikes can be maintained easily by lower level health facilities and can transport patients from remote areas much faster than four-wheeled ambulances.

The rural health facilities in India too would benefit a great deal if such bike ambulances are introduced. Although, health care has seen a significant boost in recent years, this development is largely confined to urban areas. People living in the rural areas still have to struggle to reach a hospital in case of emergencies. Bike ambulances would be effective in such a situation. What do you think?