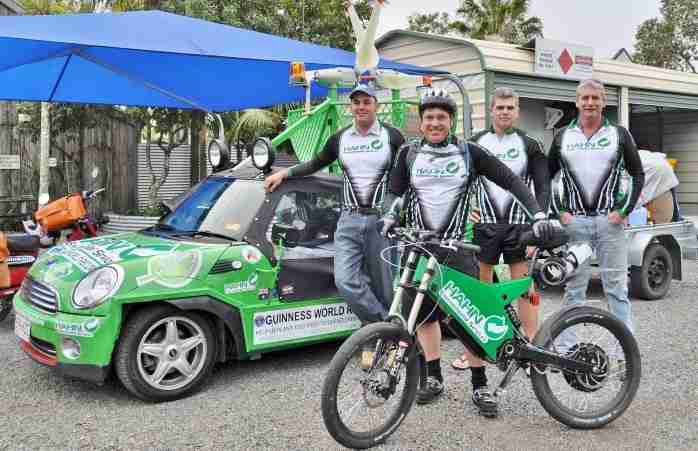 The CEO of Australia’s Hahn Environmental Services, Allan Lear, the largest producer of biodiesel in Queensland, has rewritten the distance record for the Longest Distance Traveled by Electric Bicycle in One Week. A modified Stealth Bomber e-bike was used, whose battery were charged by a wind turbine sitting mounted on a Mini Moke running on green fuel, Allan Lear managed to pedal an amazing 1,629 km (1,012 miles) through Australia’s outback.

Guinness official rules dictated him to travel about 1,200 km (745.6 miles) during the seven-days. The attempt was scheduled to start on August 24, and the World Record team spent a few weeks prior to that date fitting out a very special Mini Moke. The vehicle started life as a red and black flood damaged reject and was converted to run on ethanol produced from food waste collected from local businesses. The now green-colored car is also home to two roof-top wind turbines for the swap-and-go battery bank, and more. 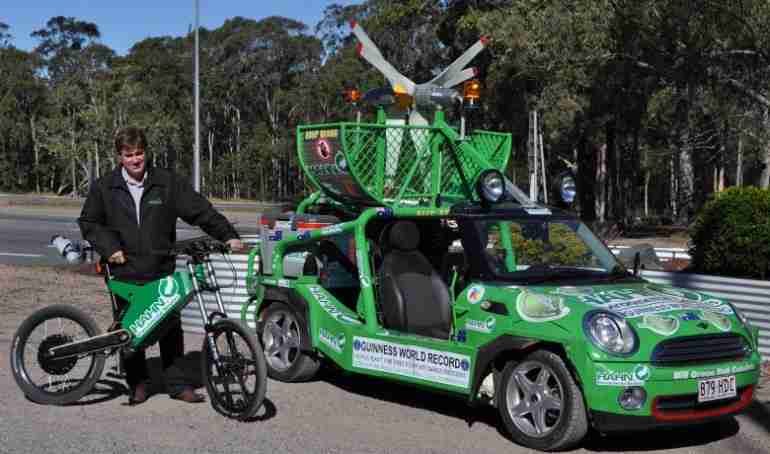 “The wind turbines charged everything including the bike batteries, our CB radios, even our mobile phones,” says Lear. “It was a very efficient system, and the mini certainly brought us a lot of attention along the way.”

Lear set off from the company’s head office in Landsborough in Queensland at 7:20am on August 25, riding a Stealth Bomber electric bike that was tweaked for longer battery life and treated to some hardcore tires and suspension. The onboard electric hub motor was set to deliver 200 watts of power, and each of the four battery packs used in the attempt averaged around 80 km (49.7 miles) – some performing better than others. Lear reports that he was able to reach speeds of over 40 km/h (25 mph) with some effort on the pedals and a helpful tail wind.

The company’s Tanya Munro told Gizmag that Lear “was very happy with the bike and had no problems at all with it, even with the really rugged terrain.”

Lear and the team, which also included a few support riders, arrived in Birdsville just after 4pm on August 31 – averaging over 230 km (143 miles) per day.

“We traveled some very rough terrain and had our share of challenges with flat tires, bad weather, road trains, wild animals and met some interesting characters along the way,” reports Lear. “The last few days were really tough.”

Money raised from sponsorship and donations is being donated to environmental charity Greenfleet, for planting hundreds of trees.Lear’s video diary from the carbon neutral trip can be viewed on his personal blog